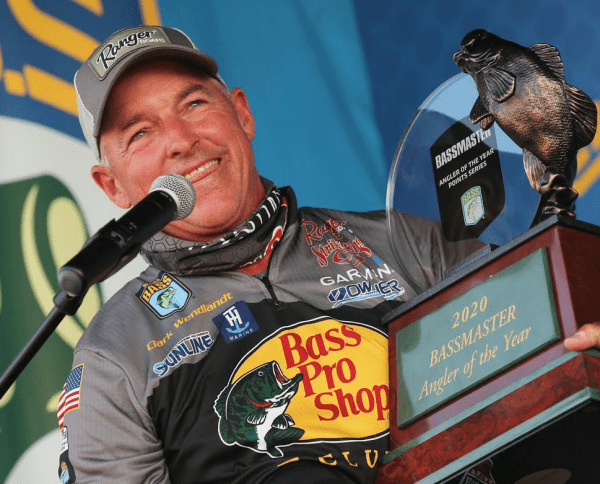 “Although I have three FLW titles, to win this one is really special,” said Wendlandt. “B.A.S.S. just has the prestige; It’s got the Classic. I always thought that if there was one award to win in fishing, it would be the B.A.S.S. Angler of the Year.”

Wendlandt started the season hot with three top-10 finishes in the first five events. He followed up with a strong 17th-place finish on Santee Cooper, before stumbling at Chickamauga, where the angler only managed to boat one fish – a 3 pound, 14 ounce, bass. This fish would later prove to be a critical catch in his chase for the AOY title.

As with most fishing tournament circuits, COVID-19 put the chances of completing the 2020 season in peril. To combat the setbacks, the Elite Series pushed events dates back further into the year and compressed the schedule. This caused anglers to scramble and scrap their spring and summer patterns and techniques in order to get on finicky fall bass.

“We finished a full season, which was a big deal to me,” said Wendlandt. “There are so many different conditions that you fish under. One time you are throwing a spinning rod in really clear water at 30 feet. The next time you’re flipping in three feet of dirty water.”

Wendlandt went into the Chickamauga event with the lead in the Angler of the Year race, but his poor showing opened the door for David Mullins and Austin Felix. He trailed Mullins by 16 and Felix by 11 points heading into the season-ending event on Lake Fork in Texas. Mullins and Fenix finished in 47th and 68th, respectively, while Wendlandt took 28th, which was enough to overtake the two anglers. Wendlandt won with a total of 680 points, just three points ahead Mullins. In the end, the difference between winning and losing the AOY came via the single, serendipitous fish Wendlandt caught on Chickamauga.

“Chickamauga really bit me,” said Wendlandt. “It was really hard, but if I hadn’t caught that fish, I would have gotten zero points and not won the Angler of the Year.”

Angler of the Year titles recognize the most consistent stick on tour. Wendlandt proved steady and readily leaned on his Ranger boat to reliably get through the tough season.

“I’ve been with Ranger since 2000 and I take pride in that,” said Wendlandt. “For me, it’s the reliability and fishability of a Ranger that makes such a difference. I know my boat can handle any situation. It’s one thing I don’t have to worry about.”