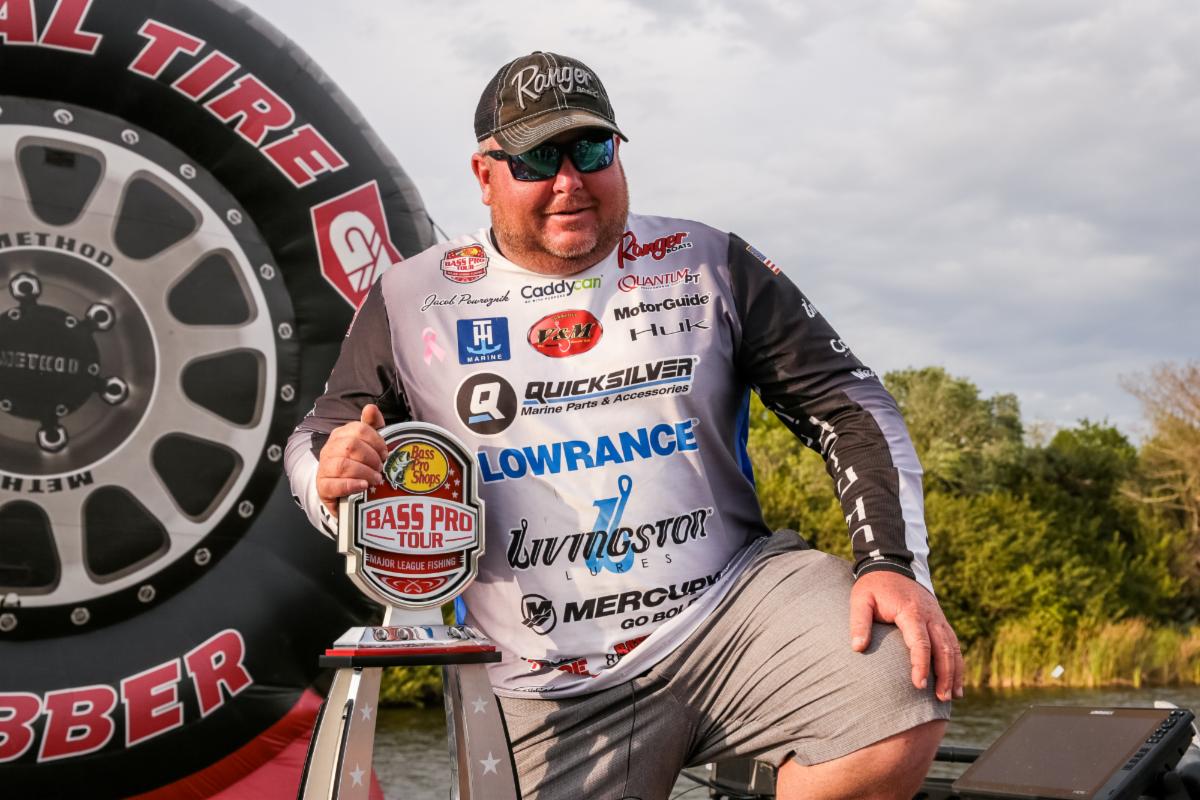 With a cold front coming through the Okeechobee area as the tournament kicked off, navigating the lake and finding bites for Group B were difficult. Winds battered the anglers as they searched for protected areas with clear water.

“The first day I ran down south because I knew it would be protected and the wind would blow the water up a bit and get a bit deeper,” said Powroznik. “I fished there around reed clumps most of the day and caught a lot of fish but only five keepers. The fishing was off. It was just cold.”

Powroznik finished the day in sixth place in his group and with 11 pounds, 5 ounces, on the board. He opted to fish the north part of the lake in an area he knew would be protected on day two. The decision paid off with the angler boating 10 fish for 13 pounds, 6 ounces, to take fourth place and make the cut to the Knockout Round.

With all remaining anglers’ weights zeroed for the start of the Knockout Round, Powroznik returned to his previous day’s spot but found the wind muddied the water.

“I opted out and got to the area where I actually won the tournament,” said Powroznik. “It was clean and a big stretch so I knew fish were coming and going. The last period I caught 21 pounds and bumped me up to the top eight.”

His day-three total of 29 pounds, 11 ounces, was enough to make the final cut of top eight anglers who would move on to Championship Round where all weights are again zeroed. Powroznik return to the previous day’s location and found crystal clear waters.

“That’s what I needed,” said Powroznik. “I just needed to see where to cast that worm.”

All four days of competition, Powroznik threw a variety of brands of Junebug-colored swimming worms.

“With our format, we try to catch as many as we can,” said Powroznik. “It’s not going after five big ones. Instead of getting beat by a guy flipping for mat bites, that worm will catch big ones and it catches a lot. That was the game plan.

“The stars lined up, and I got some momentum. Momentum is a big key in bass fishing. Once I got going, I never looked back.”

While a swimming worm brought him bites, Powroznik’s Ranger boat got him where he needed to be safely, even in the bad weather conditions anglers faced during competition. Powroznik has been with Ranger Boats since 2004 and is confident in Ranger’s safety features and the expansive room to move around the boat.

“My ranger boats have been great to me,” said Powroznik. “It’s big and wide, has a big deck and holds a lot of gear. And, if you cut one in half, it will still float. How can you go wrong with that?”