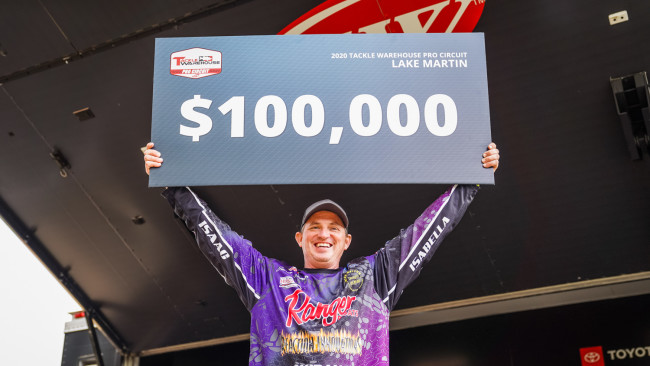 The event marks Abram first top pro-level win in his fishing career. The event culminated with Abram weighing his fish last on the final day. The angler needed 10 pounds, 2 ounces to overtake Ron Nelson. Abram added each fish individually and had 7 pounds, 12 ounces, before adding his final kicker fish for an overall weight of 52 pounds, 9 ounces to take the win.
“It’s an accomplishment that I have always wanted,” said Abram. “I don’t really have words to describe the feeling, but I feel like I belong.”
Despite having never fished Lake Martin before, Abram felt he knew what would catch them after pre-fishing the lake.
“My practice was fun,” said Abram. “I caught lots of fish but only three really big ones. That sort of clued me into what I needed to be doing to catch a big one because two of my bigger fish came from the backs of creeks on a Skinny Dipper.”
Abram caught each of his fish on a Reaction Innovations Skinny Dipper or Flirt Worm. He would start each day along the same stretch of bank and catch a quick limit of spotted bass before the sun would come out and he would transition to the creeks in search of largemouth.
“By 10:00 each day the sun would come out,” said Abram. “It was a beautiful tournament. I was waiting on the sun to put a shade line on the docks. Once the sun would come out, I would focus on the very backs of creeks. Anything that was less than a foot of water. “
Abram found himself in the top 40 at the end of day one, but rebounded on day two by bringing in the heaviest bag of the tournament – 17 pounds, 10 ounces – to vault him to the top of the leaderboard. Most anglers would start to feel the pressure with the lead and two more days of fishing, but Abram kept his composure.
“You would think there would have be a lot of pressure,” said Abram. “If you would have asked me before the tournament, I would have said ‘it would be tremendous pressure,’ but I didn’t really feel any pressure going into day three because I was really confident I knew I could go out and catch a limit of 8-10 pounds.”
Abram took his confidence in his pattern and returned to the weigh-in on day three with 12 pounds, 6 ounces, leaving him with a lead of 2 pound, 8 ounces, over Ron Nelson.
“On most lakes a 2 ½-pound lead is not good,” said Abram. “But on Lake Martin that 2 ½ pounds is like catching a five-pounder on any other lake. It was a pretty good lead. I didn’t feel any pressure in this tournament until around 12:30 on the last day.”
After going a few hours without any bites and only 11 ½ pounds in his livewell, Abram felt he was letting this one slip away.
“At the weigh-in, I didn’t think I had enough,” said Abram. “I knew Ron Nelson was steadily catching them. I had no idea I would win until Ron actually weighed his fish.”
Nelson brought in 12 pounds, 10 ounces, while Abram weighed 11 pounds, 3 ounces, giving him the win by 1 pounds, 1 ounce. Abram’s run-and-gun style of fishing Lake Martin paid off and the angler credits his sponsors such as Ranger as a critical part of his success.
“It was absolutely key for me running my Ranger,” said Abram. “This place is really big. I bet I made somewhere between 60 to 70 stops everyday. We push and push to the very last second every day. I think I checked in on day four with two minutes left.
“When you know you are pushing it in a narrow window of three to five minutes to make it back with a chance to win $100,000 if you can’t rely on your equipment to hold up, you don’t take that chance. I don’t blink an eye when it comes to my Ranger.”
bass fishingFLWRanger BoatsTournament Winners
« Aqua-Vu® HD Cameras Capture Never-Before-Seen Burbot Behavior
Humminbird® and Minn Kota® to Release Second One-Boat Challenge Episode on March 26 »