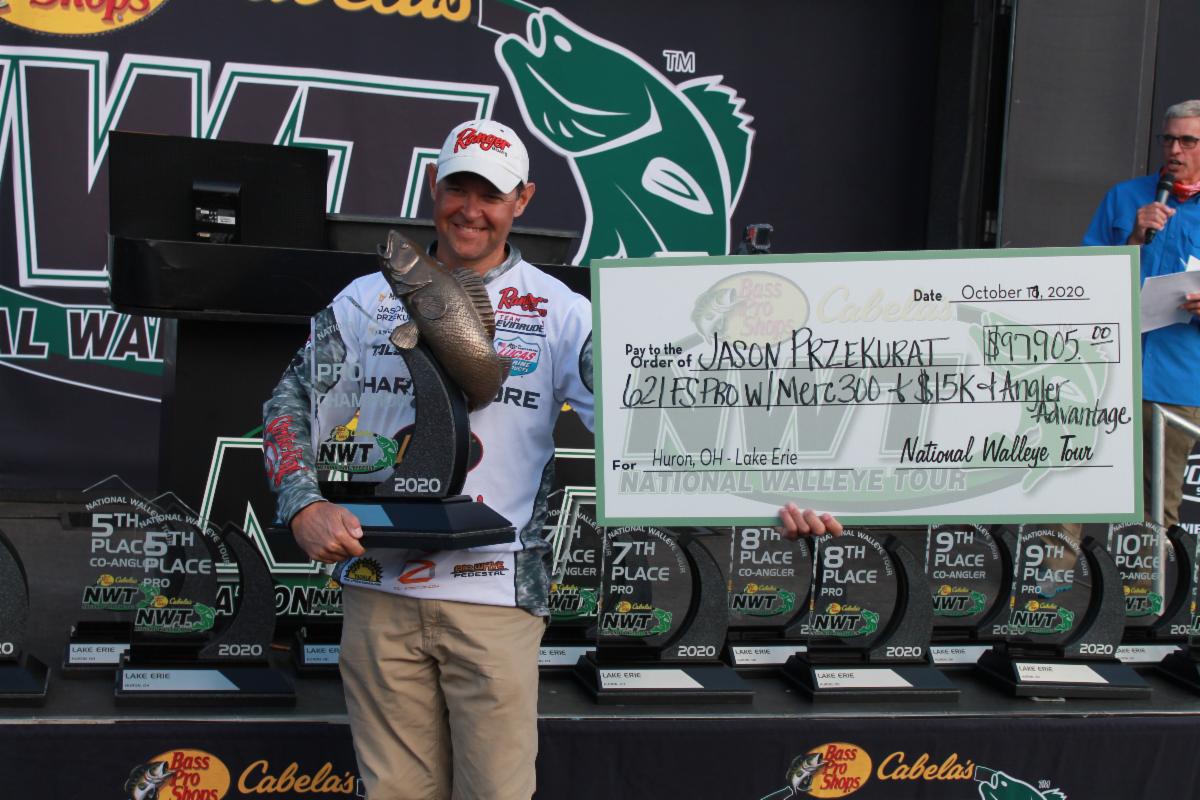 Ranger Boats pro angler Jason Przekurat won the National Walleye Tour presented by Bass Pro Shops & Cabela’s (NWT) Championship event on Lake Erie, October 16. The win marks the first time a pro angler has won the NWT championship twice.
Przekurat adds this championship win to his 2016 NWT Championship victory on the Missouri River and has another pro-am championship win along with two Angler of the Year titles. At the time, the 2016 NWT Championship was the crowning achievement in Przekurat’s fishing career.
“This win is pretty surreal,” said Przekurat. “To win my first one in 2016 was a major accomplishment in my career. It was a goal of mine to win a pro-am championship on a national level. To win that one, I thought it was the peak of my career. To win a second one when no else has, it’s almost better than your first one.”
The three-day championship enjoyed great weather during day one, but a front pushed through causing dangerous conditions, leading to day two being pushed back a day. The following two days of fishing featured high winds and waves, causing anglers to adjust on the fly.
“It was kind of a mind game going out after that blow day because we knew everything would change,” said Przekurat. “Throughout my career when any time there’s a front, my philosophy is to fish low and slow. Getting down on the bottom and slowing it down will generate more bites.”
With the warmer temps of day one, Przekurat caught fish higher in the water column, bringing in 23.43 pounds to put him in 11th place. Slowing down and fishing deeper in the water column paid dividends with the angler weighing 26.44 pounds on day two and gave him the top spot on the leaderboard going into the final day. With a 1-pound-plus lead on Korey Sprengel, Przekurat planned on returning to his spot near a weather buoy 18 miles out.
“I was going to go back to the area I fished the first two days,” said Przekurat. “We checked the info from that weather buoy and it said it was blowing 20 miles-an-hour. On shore it didn’t seem windy at all.”
After running five miles offshore, Przekurat realized the wave size and wind speed would make it difficult to fish his area so he opted to save the run time for fishing and make a hard left to fish a closer area.
“I could tell the waves were getting bigger and the wind was blowing more than expected,” said Przekurat. “I had another school that was closer that we call ‘Seven-Mile School.’ It didn’t take long, as I had two 4-pounders and a 5.11, on my first troll. That gave me the confidence that I could stay closer to the take-off and be able to catch the fish I needed to win.”
By bringing in 23.38 pounds on the final day, the angler withstood a hard charge from Sprengel who finished in second by less than half a pound difference. For his efforts, Przekurat won a Ranger 621FS PRO with a 300-horsepower Mercury outboard and $15,000 in cash.
With bad weather and water conditions, an angler’s boat performance step aside to the safety aspect. Przekurat’s Ranger 621FS PRO features a foam-filled hull, making his boat as safe as possible and giving him peace-of-mind when confronted with tough conditions.
“That’s one thing about a Ranger, you don’t ever have to worry about sinking,” said Przekurat. “The biggest thing with this FS PRO is the Zip Wake Trim Tab system. Anyone that knows about running big water is you need to control your boat on which way it’s listing and how you are driving through the waves. After running a Ranger for the last 21 years, this year’s boat was my favorite. The main reason is that trim tab system. It’s incredibly effective.”
National Walleye TourRanger Boatswalleye fishingWalleye Tournaments
« Head2Head Fishing Releases Official Schedule for 2021 Pro Walleye Series
Carp on Camera: High-Definition Aqua-Vu® HD Unlocks Astonishing Underwater Fish Behavior »