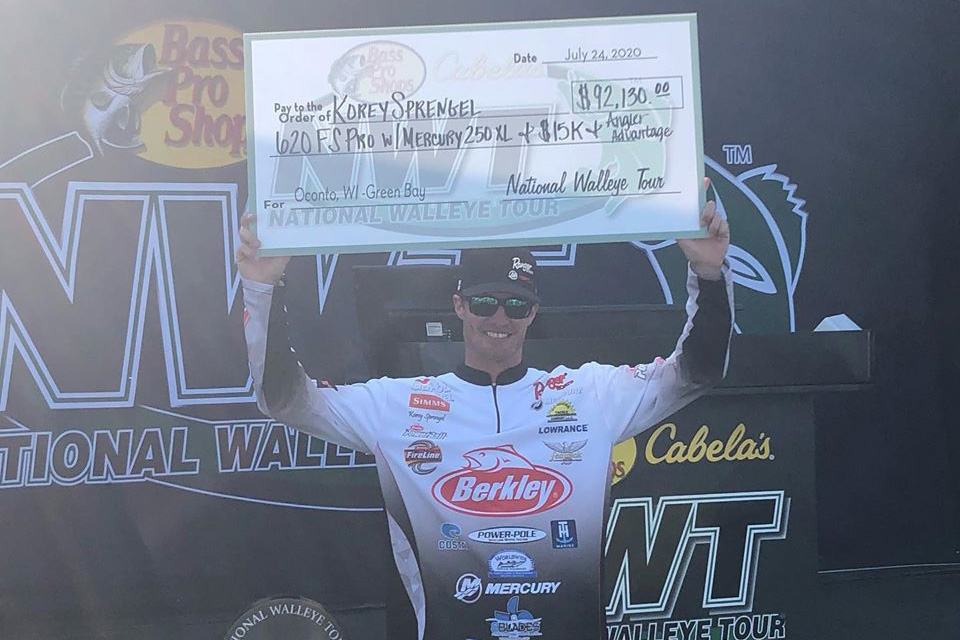 Ranger Boats pro Korey Sprengel won the season-opener for the National Walleye Tour presented by Bass Pro Shops & Cabela’s on Green Bay, July 24. By participating in the Ranger Cup program, the angler upgraded the prize boat and motor package to a Ranger 620FS Pro with a 250-horsepower Mercury outboard.
With a series of cold fronts set to hit Green Bay just ahead of the two-day tournament, Sprengel opted to only pre-fish one day during the week leading up to the tournament.
“We had 90 degree temperatures in the three weeks leading up to the competition,” said Sprengel. “It was super hot with south winds. On Green Bay, when you get north and north/northeast winds, it flips the fishing upside down. It changes the water temperature drastically. It was going to be a fresh lake going out on day one, so I took off those days to relax and get the boat together.”
With his first choice of location covered up by boats, he opted to run 20 more miles to fish an area of islands he knew would hold fish. The area held large boulders and Sprengel had fished the area before for bass and felt confident the area would hold walleye given the conditions.
All of Sprengel’s 10 fish came from trolling crawler harnesses and finished the first day with a heavy bag weighing 42.13 pounds. This left him with a sizeable 6-pound lead going into the final day.
With strong north and northeast winds, Sprengel once again opted to make the long run to his previous spot despite rough waves and high winds.
“That’s the nice thing about the new Ranger Pro series is the Zipwake or trim tab,” said Sprengel. “You can really dial in that boat no matter. You can roll the hull the way you need to for taking quartering waves that’s just as good as going straight into them. I don’t worry that my boat is going to fail me no matter the conditions.”
The decision to return to his day-one spot proved productive again with the angler boating 27 pounds by 8:30. As his spot became crowded with other boats, Sprengel managed one more run through the area and landed a 24-incher and then another 6-pounder for a final day two weight of 35.35 pounds. His two-day total of 77.48 pounds bested the closest competitor by more than 17 pounds. For his effort, Sprengel took home a total of $92,130 in winnings
Ranger BoatsTournament Winnerswalleye fishingWalleye Tournaments
« Two New Members Added To RBFF Board Of Directors
Making the Best Rods on Earth®: Heritage Only Goes So Far »