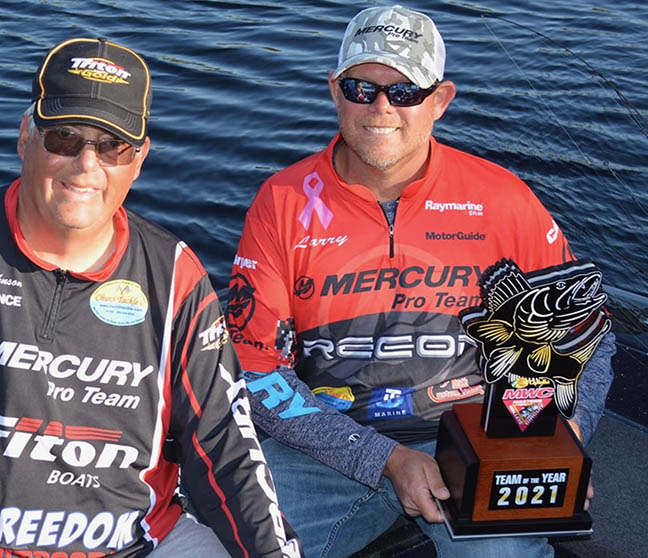 The race for Team of the Year (TOY) in the 2021 Master’s Walleye Circuit (MWC) season came down to the final Bass Pro Shops & Cabela’s Masters Walleye Circuit event on Minnesota’s Cass Lake, September 18 and 19. With the top 11 teams in the running and with all of them attending the tournament, it made for a close race and an exciting finish. When season points were tallied, the duo of Larry Rhoads (Milford, OH) and Dan Johnson (Fayetteville, OH) came away with the 2021 TOY crown.  The team earned a TOY package valued at over $10,000, which includes paid entry into four MWC events in 2022, lodging accommodations, travel stipends and more. 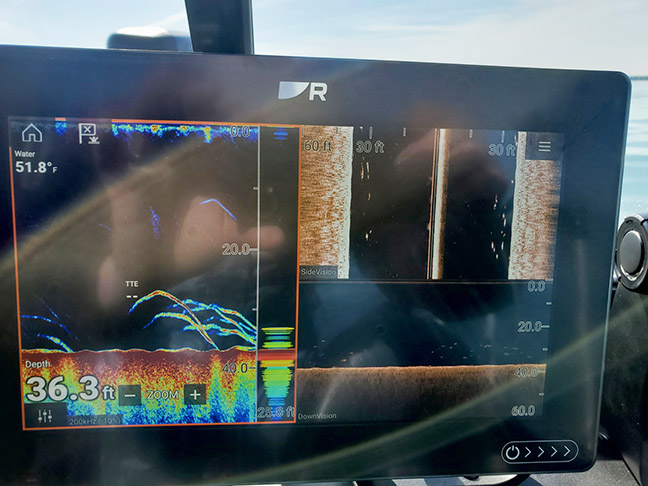 “My Raymarine electronics help me prepare and execute for success in every competition,” says Rhoads, who runs three fully networked 9” Raymarine Axiom+ multifunction displays on his Recon boat – two on the console and one on the bow – along with a RealVision transducer and two additional 200KHz transducers.  “With nearly endless display combinations of CHIRP sonar, SideVision, DownVision, RealVision 3D – from any of my transducers – plus my charts, the system gives me a complete and customizable picture of what’s happening around and beneath my boat. I can’t believe how much I’ve learned to rely on Raymarine SideVision,” Rhoads adds. “It’s incredibly useful in locating the specific types of structure that walleyes most often use, so it allows me to eliminate water quickly. Once I’m on the chunk rock or other particular structure I’m looking for, I can see where individual fish are and even get a perspective on their size, then I can quickly set waypoints and fish them with any presentation I choose.”

A 15-year veteran of the MWC tour, Rhodes says TOY is always in the back of his mind. “When the opportunity actually presents itself and it actually happens though, it truly is surreal,” the Raymarine pro ambassador says. “This season we were in second place in the TOY race by three points going into the final tournament on Cass. Dan and I had a goal to finish in the top 11 or 12; we thought if we could do that it’d be good enough to win TOY. We had a combination of good bites casting spoons, Shiver Minnows, and hair jigs on the first day of the tournament, but those bites didn’t hold up on day two. We went to live bait and ended up getting our five fish rigging with redtail chubs that second day. We didn’t make our goal and ended up finishing in 29th place, but it still allowed us to add to our season points. Fortunately for us, many of the other top teams had their own struggles, and it turned out to be enough for us to earn the 2021 TOY title.”

A full-time software engineer working in the healthcare industry, Rhoads is a married family man with three kids. “When I’m home, I’m really busy,” he says. “It takes a village for me to be afforded the ability to fish these tournaments, and I’m extremely blessed and grateful to have a family who not only supports me in my tournament fishing but also encourages it.” Rhoads also credits Johnson – his fishing partner for the past 11 years – the MWC; MWC sponsors Bass Pro Shops, Cabela’s, Mercury Marine, and Lowe Equipment; as well as his own sponsors for his success.

Rhoads says he and Johnson plan to be back on the Bass Pro Shops and Cabela’s Master’s Walleye Circuit next season to defend their title. “Given the perks we won from this year’s TOY, it’s going to make it a lot easier for Dan and me to compete next season. We greatly appreciate everyone’s support and are looking forward to having fun and being back in the hunt in 2022.” 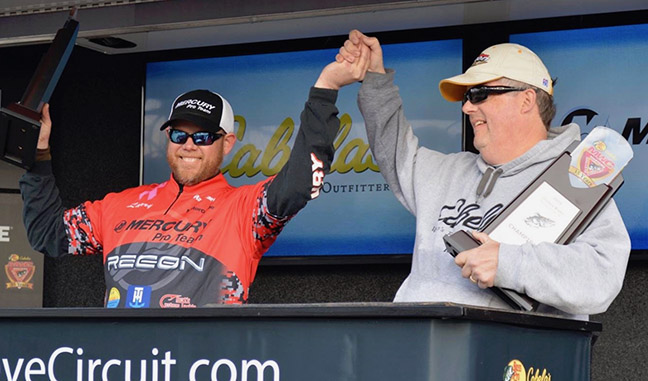