Rig Your “Crappie Yacht” for Versatility 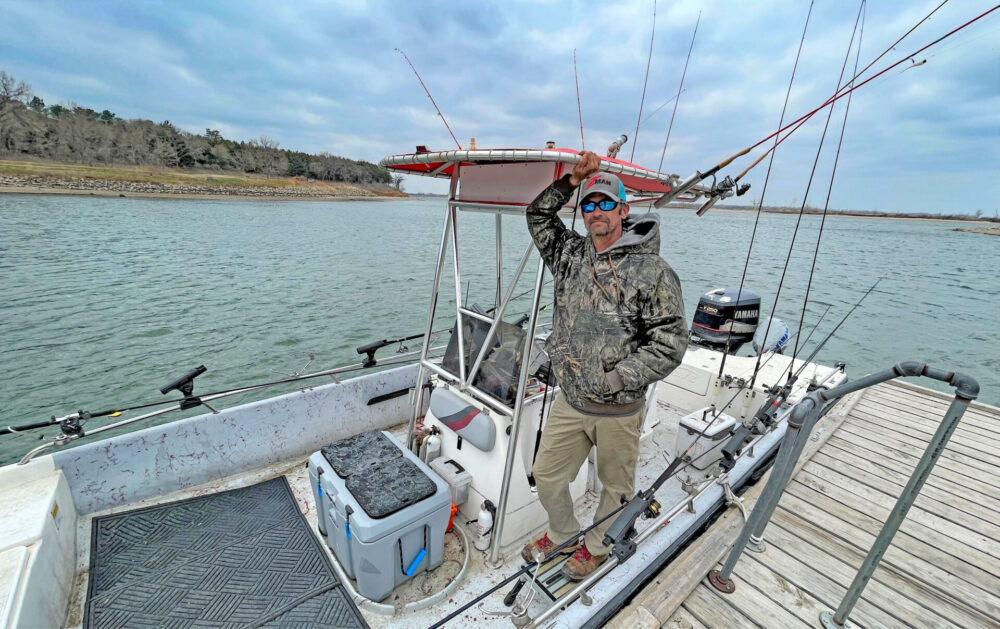 You won’t find many crappie-fishing boats like the one guide Joe Bragg operates.

In the nation’s heartland, crappie fishermen use everything from bass boats to john boats to aluminum V-hulls to chase the speckled gamefish. But a 24-foot, 4-inch long bay boat? Let’s just say Bragg defies customary behavior when he takes his customers fishing on Milford Lake in northeast Kansas.

But Bragg says there is a method to his madness. His “Crappie Yacht,” as he calls it, is a fishing machine. Bragg has it rigged it to suit multiple needs.

He is so satisfied with its performance that he sold his old Ranger bass boat.

“You see this type of boat down in Louisiana, Florida and Texas, where they do a lot of flats fishing,” said Bragg, who runs the Thump30 Guide Service. “But I got to thinking, ‘This would be a great boat for crappie fishing, too.’

“We like to fish skinny water flats, but we also need to get across the lake in some rough water. This boat handles both. And I wanted to have a boat that had enough room to take families out. I can comfortably take five people out and everyone has plenty of room to fish.”

Bragg ruled out a pontoon boat. He felt that was just too much boat to launch by himself and handle in the wind. He bought a used Blue Wave bay boat and customized it to become what he believes is the ideal crappie boat.

He says the center console allows for plenty of room and ample seating. And with its shallow draft, Bragg can maneuver into skinny water where the crappies often head to spawn.

As much as anything, though, Bragg is pleased with the versatility of his craft. He has rigged it to meet virtually every method he uses to catch crappies.

“The big thing is that you have to be versatile,” ~ Joe Bragg, Crappie Guide

Like most crappies fishermen these days, Bragg relies on a Garmin LiveScope to see real-time movement of crappies. He uses a Minn Kota Terrova trolling motor with spot lock and 112-pound thrust.  He can control the trolling motor with a remote-control fob hanging from a lanyard around his neck.

His customers sit in two comfortable seats at the bow in a unit called Sidekicks in front of the screen. Bragg often stands behind the Garmin unit and advises customers when it’s time to set the hook.

With the advent of live-image sonar, the once-popular method of spider rigging – in which fishermen slowly move through brushy areas with multiple baits dangling from rods in holders – is not as popular as it once was in many places. But there are still times when it can be a preferred tactic.

“When there’s a lot of wind, it can be hard to hold over shallow brush, even with spot lock,” Bragg said. “That’s when I’ll still use spider rigs.

In Kansas, fishermen are restricted to the use of two poles per person most of the time, unless they purchase a three-pole tag.  But if there are several fishermen in the boat, Bragg can usually put out enough lines to cover the brush he is fishing.

He uses two sets of Tite-Lok rod holders at the bow of the boat, one on each side .Each unit has three rod holders, ideal for spreading out the baits and avoiding tangled lines.

Bragg has multiple Cabela’s rod holders bolted to the sides of his boat. When the crappies are scattered on a flat, he often trolls Bandit 300 crankbaits.

He usually uses a line-counter reel to get his lines 100 feet back of the boat. He uses the Terrova remote-control trolling motor to steer his course, and a 6-horsepower kicker gas motor to provide the push. He strives to troll crankbaits at a speed of 1.6 to 1.8 miles per hour.

Bragg still likes to fish old school. He and his customers will cast jigs under corks when the crappies move shallow to spawn and feed in the spring.

Because of the length of his boat, Bragg knows there is plenty of room for fishermen to spread out and safely cast.

Bragg is a field-staffer for ZMan lures and he uses the company’s baits when he is crappie fishing.

Much of Bragg’s rigging is customized to his boat. Be he knows that other anglers can use modifications of his methods and still set up a fine crappie-fishing machine.

“The big thing is that you have to be versatile,” he said. “I know a lot of crappie fishermen who won’t do anything else other than LiveScope. But sometimes the conditions call for other methods.

“You have to be set up to change quickly and without a lot of hassle.”