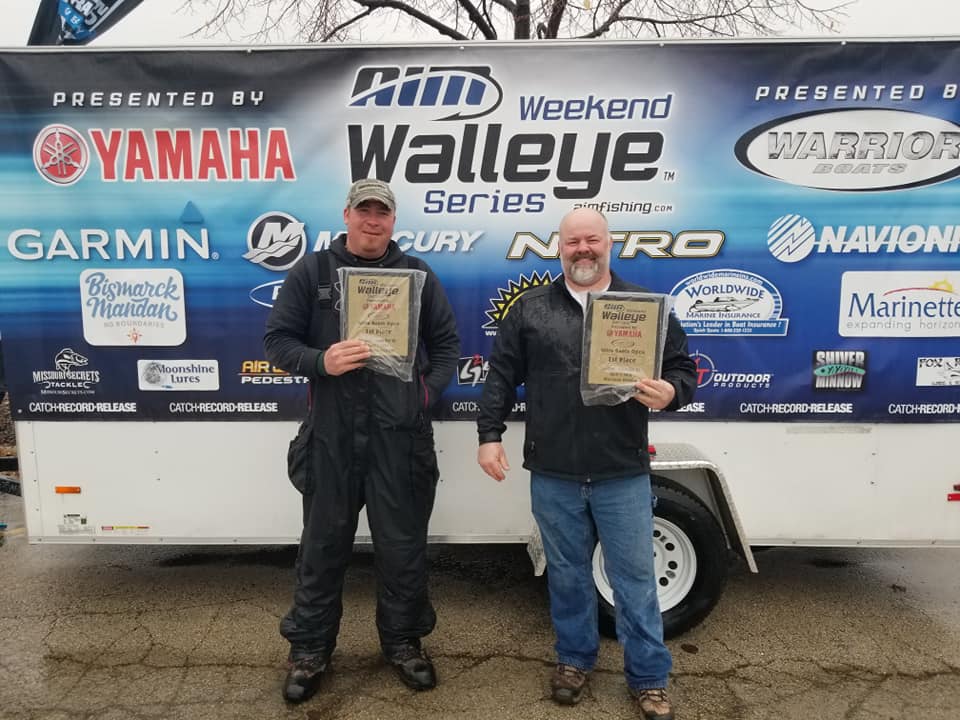 All it took was one trip upriver Saturday to the DePere Dam on the Fox River near Green Bay for Sam May and partner Matt Bootz to settle on the spot they’d fish, and it won them a cool $8,000 pot in the season’s first 2019 AIM Weekend Walleye Series (AWWS) tournament in Wisconsin, Sunday, April 7.

May, from Rhinelander, WI, and Bootz, from Wausau, WI, finished atop the 100-boat field just shy of nine pounds to fire the opening salvo in the march to the state championship and beyond, at the opening AIM tournament of the season, and the first in Wisconsin. They earned $8,000 from AIM, and another $1,000 from Garmin for using its electronics.

“What a great start to the season,” said Denny Fox, AIM national tournament director. “We had one minor glitch, a change in the take-off spot, but other than that, the top five each lifted 30 pounds or better. May and Bootz showed how it’s done, and again, our Catch-Record-Release™ format proved its worth big time, as the fish our teams hooked are still in the river, ready to spawn.”

Their 40.62 pounds of river hawgs came like most in the field experienced, by grinding out a bite here and there throughout the day. They boated only seven fish, but those five, averaging a paunchy eight pounds each, were all they needed, May said.

“We had four big ones from about nine to 7-1/2 pounds, and we had one around 5.9 pounds, fishing by the dam,” May said. “Nearly everybody else was in the river. It was either the river, the dam or the mouth, and we chose the dam.”

Their weapons of choice? Shad Raps and No. 7 Storm Smash Shads, banged on the bottom. “If you weren’t making contact with the bottom, you weren’t catching any fish.”

They chose wisely because they also pre-fished wisely on Saturday, heading their 150 four-stroke Mercury-powered boat to near the dam.

“We made the decision to pre-fish towards the dam. We fished a little in the channel and noticed it wasn’t very productive. We were able to get into a community spot and it was wide open. We had about 45 pounds of fish Saturday including a 31-incher,” May chuckled. That made their decision pretty easy, he said. Then the tough stuff began, starting with the order they left on Sunday.

“We were boat 99 (that was out of 100), which worried us getting there. But we got lucky,” he recounted. Fifteen minutes later, they found only one or two locals in the spot they wanted, and when they moved out, May and Bootz moved in, using their bow electric to stay on station, and when their batteries got low, an anchor.

“We caught seven scoring fish, and foul-hooked and released three more. It was slow, a grind. It seemed like you’d catch one and a half hour later you’d catch another,” he said.

But that slow pace was tempered by their big fish. Two 27-1/4 inchers, the first one about 10 a.m., all on the bottom, with those fast diving lures.

A bit later, a 28 hit, as a few tournament boats made it to their spot, and they didn’t catch another fish after 1:30. They looked at their card total, and started coming in pretty confident.

“We just worried about someone out in the lake beating us,” he said. “We figured 30 to 35 pounds was going to win it, and when we got 40, we were more than excited.”

May said he and Bootz plan to fish all remaining Wisconsin tournaments, and hope to be in contention in those, too, beginning with the next, April 28 on the Wolf River at Winneconne. Until Sunday, their highest finish was third last year on Lake Winnebago. “We’ve been doing it since AIM started. It’s a great format and we like the guys we fish with, too.”

One team that may be re-thinking its decision to fish one here and there instead of the whole Wisconsin series is the second-place winners, Noah Humfeld and retired pro Todd Grams, both of Cottage Grove, WI.

This was also Humfeld’s first top five AIM finish. He’s been fishing AIM “off and on” for the last five years in his 75-hp Mercury-powered tiller boat. He said he convinced Grams to come out of retirement, and they went home $2,400 richer. They’re now thinking about adding at least the Marinette event on May 19.

‘We did this one on a whim. I said ‘you know what, it’d be fun to fish a tournament with Todd. He was the one who got me into walleye fishing, so I thought, ‘let’s see if the old guy still has it, so I broke him out of retirement,” Humfeld said.

They pre-fished Green Bay proper Friday, and quickly eliminated that water. “We went to see if we could find fish away from everyone else,” Humfeld said. “We looked around and couldn’t find anything worthwhile, so we knew we were going to fish the river, and our whole goal was to find something where people weren’t.”

With 99 other boats doing the same, that proved to be a hard task, but they stumbled on a technique that brought them 31.67 pounds for the day.

“There were a couple of key things and we think we found out why later. There were little troughs, very gradual and we noticed we consistently pulled fish out of those spots. The fish up shallower were more active,” he said. We ended up doing well driving along the channel break and running our side-imaging looking for schools.”

But it was still a tough bite, casting ¼- to 1/8-ounce Pro V Bend jigs with fathead minnows and not getting a hit until the afternoon when they jumped into the pack.

“We ended up catching a 15, then an 18, and the third fish was a 28. It was a total fluke. We hadn’t practiced there, so we were able to grind out four in that spot and then went back to our pattern and decided ‘let’s just go grind and cast at the pods that we found,” said Humfeld . “It seemed like we were following the same school upriver. When we stopped catching them, we’d cruise up and we’d start marking them again.”

The technique they used was counter to most jigging: they caught their fish bringing their jigs against the current. “I was using a ¼-ounce, and Todd was using a 1/8-ounce, with a minnow, that was it, pretty simple. We just slowed way down and didn’t touch the trolling motor all day. We had the perfect drift, but we were casting downstream and bringing it back up. Going the other way we were just not getting bit. We had to be bringing them up current. It was pretty backwards. Giving that jig more hang time in the current I think made a big difference.”

Their success here is making them re-think their plans to not fish other AIM events. “We need to discuss with our significant others to make sure it’s okay, but I think we’ll for sure get to Marinette and go hurt some more Green Bay walleyes.”

Here’s how the other top five in the field fared: In third, and winning $1,800 for boating 31.15 pounds were Nick Heelein, Genoa City, and Jason Mata, of Plainfiield, WI. Fourth place and winning $1,500 for 30.40 pounds went to Mike Feurig, DePere, and Tom Pfister, Meno Falls, WI. In fifth was Anthony Engelbert, Little Chute, and Dylan Peotter, Kaukauna, WI. They landed 30.20 pounds, good for $1,300.

Next up, Wisconsin has another tussle April 28. Minnesota and North Dakota, your turn’s coming with twin tournaments May 12, at Hager City on the Mississippi, and in New Town on Lake Sakakawea. Check, double check, then check your rigs and outfits again. Because AIM’s coming!

Stay connected for all AIM info at AIM’s Facebook site, or its website, aimfishing.com. Come back to our Facebook site after each tournament for Big Fish Thursday to see who wins a new Navionics map card!

Anglers Insight Marketing LLC (AIM™) is a unique tournament organization created and owned by many of the most accomplished and recognizable professional walleye anglers, along with others who share the mission of advancing competitive walleye fishing and making it sustainable into the future. AIM is committed to marketing excellence on behalf of its tournament competitors, the tournament host communities, and the brands that partner with it. AIM is also committed to maintaining healthy fisheries across the nation by the development of the exclusive AIM Catch-Record-Release™ format which is integral to its dynamic events and unparalleled consumer engagement. For more information about AIM™, AIM Pro Walleye Series™, AIM Weekend Walleye Series, AIM sponsors and AIM anglers, visit www.aimfishing.com.