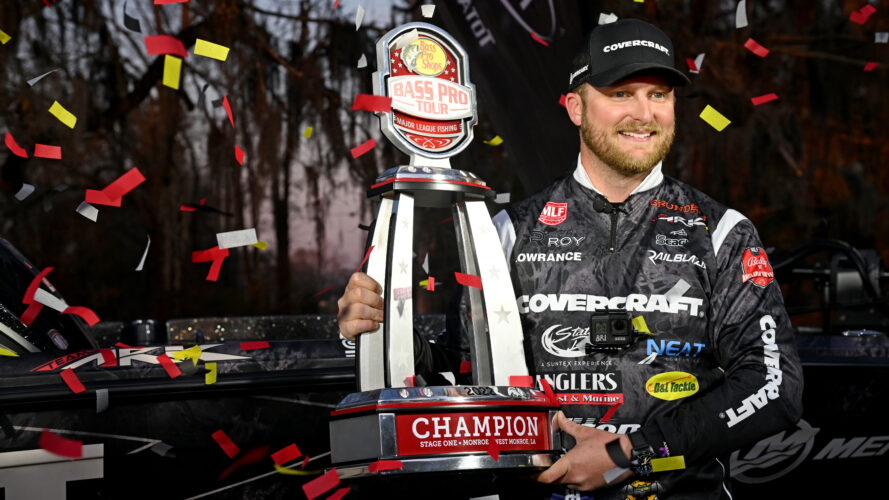 Bussey Brake and MLF records were broken (again), and there’s a brand-new winner on the Bass Pro Tour. Safe to say, the Championship Round of the B&W Trailer Hitches Stage One Presented by Power-Pole was a fitting ending to a stellar week in the Louisiana bayou.

However, the day — and $100,000 — belongs to Bradley Roy. The Covercraft pro is the Stage One champion after catching five bass for 26 pounds, 2 ounces, beating second-place Alton Jones by just 1-3 to claim his first career professional-level win.

Roy’s five bass for 26-2 may look impressive to anyone who isn’t Roy.

“Man, that was brutal,” Roy said as he awaited confirmation from his MLF Official that he did, in fact, get the win. “That third period was so rough for me. SCORETRACKER® is rough when you’re near the Cut Line, it’s even worse when you’re in first in the Championship Round and you’re not catching anything.”

Roy took over the lead in Period 2 and entered Period 3 with a 2-3 lead over Bryan Thrift thanks in large part to a 8-14 largemouth he caught late in Period 2. Roy caught all of his fish flipping a creature bait on an Ark Fishing 7-foot-6 Pitching Stick. But the Mercury pro went the final three hours without a bite, which allowed the rest of the field — led by Alton Jones — to mount a comeback.

Jones caught four bass for 20-5 in Period 3 to pull within 1-3 of Roy with only 12 minutes left. Those final minutes were agonizing and stressful for Roy, but he was able to hold onto his lead for his first-ever professional-level win. The Kentucky pro is now $100,000 richer and will bring his win home to celebrate with his wife, Danielle, and new son, Lucas.

“Everybody always says when you have a new baby, you win a tournament,” Roy said. “The baby pattern worked for me today and I have my support system to thank for that.”

This isn’t a typo. Randy Howell did, in fact, break his own MLF record for the biggest bass caught in competition that he set on Wednesday in the Knockout Round on Caney Creek Reservoir. Howell landed a 10-11 in the Knockout Round to break the previous record. On Thursday, the Alabama pro brought in a massive 12-14 by flipping a Yamamoto Senko.

Howell not only set the MLF record, but also the Bussey Brake record that was set in March 2021 when Tackle Warehouse Pro Circuit angler, Tyler Stewart, landed a 12-11.

In total in the Championship Round, there were three 5-pounders caught, two 6-pounders, three 7-pounders, one 8-pounder, two 9-pounders, and Howell’s record 12-14. Bussey Brake lived up to the hype, that much is for sure.

The Bass Pro Tour rolls onto to the Toro Stage Two Presented by Grundéns from Lake Fork in Quitman, Texas. Competition runs from Feb. 19-24. Check out MajorLeagueFishing.com for details.

Bally Bet Angler of the Year