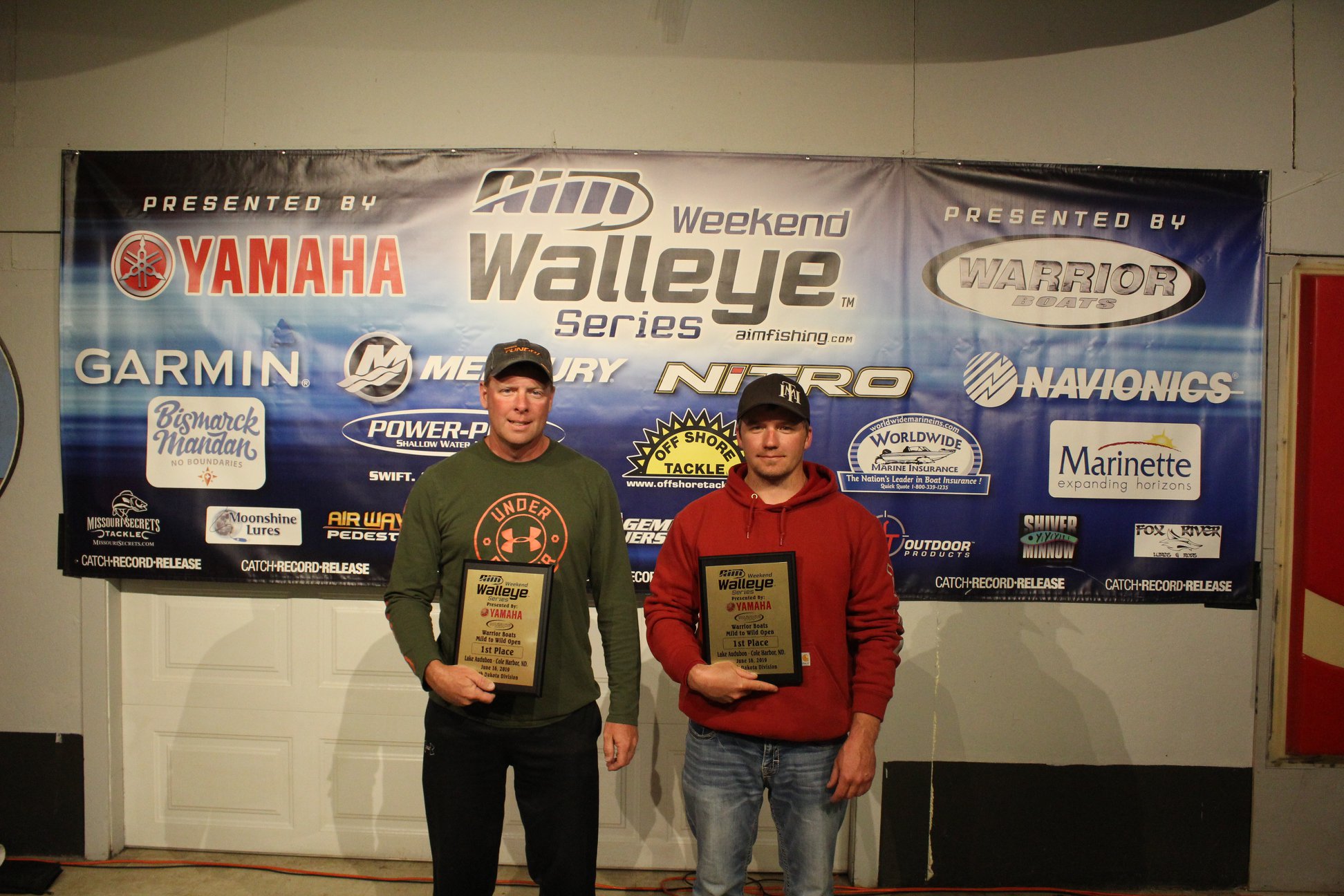 It was their second time at an AIM tournament, and the team of Loren DesJardins and Jake Rasmuson became first-time winners, taking home $3,000 in Sunday’s AIM Weekend Walleye Series Warrior Boats/Mild2Wild Open, in AIM’s first visit to Lake Audubon, at Totten Trail.

“Our teams caught bass, muskie, northerns, and oh yeah, walleye, making this one on Audubon a special tournament, and a great warm-up for June 30 on Sakakawea proper,” said Denny Fox, AIM national tournament director. “Many teams were expecting about 16 pounds to take it, but the winners came in with more than 20,” he added.

Top of the heap were DesJardins, from Surrey, ND, and Rasmuson, of Mohall. The pair burned maybe three gallons of gas all day to hit 20.20 pounds and that bundle o’ cash. What was the reason they entered? Simple. “Truthfully this tournament was so close to home, it was hard to pass up,” DesJardins said. “Catch-Record-Release™ is a great format. That’s a big draw, holding those fish for a picture and putting them right back in. It’s beautiful.”

Here’s how they did it in their 250 Merc Pro XS—powered platform, pulling cranks and using Lindy rigs.

DesJardins says he usually goes after walleye on Audubon in spring, before the action on Sakakawea starts getting hot, and he began his pre-fishing Wednesday evening, Friday, Saturday. Right away Wednesday, he found some mighty nice fish shallow.

“We caught all the way up to 29 inches. One big thing with this tournament was that in the five days prior, we had five thunderstorms and two cold fronts come in. That’s why the weights were so far down or everyone would have done a lot better,” DesJardins said.

What they did keep track of: their bigger fish hit in the afternoon on cranks, and color was crucial. Tournament day, they started pulling spinners, concentrating on Audubon’s west end.

“We pulled spinners through the morning deep and went out for our five security fish because the crank bait bite was slower and wind-aided, and didn’t happen until the afternoon. We knew we had to find fish in the morning. Timing mattered a lot on this tournament. Without knowing that, we would have pulled shallower in the morning and wouldn’t have come back if we didn’t know what time the fish moved up,’ he continued.

The team worked for fish on the deep flats, and around 11 a.m., they made their move shallow, switching from live bait rigs with crawlers and leeches and 1-1/4-ounce bottom bouncers, to cranks. From then on it was “fish on.”

“It was non-stop between the northerns, muskies, smallmouths, and enough walleye mixed in. We got a muskie between 36 and 28 inches, right next to where we were catching walleye.

“When we were live baiting, we had five solid fish but they weren’t great fish. We switched to cranks, and the first five fish were bigger and grew from there. We were hoping to get two or three off cranks in the afternoon,” he said.

Instead, they did a little better. “We picked up seven, on No. 5 Shad Raps and No. 7 Flicker Minnows, long lined, with the 5s out in the 100-foot range, and the 7s trolled about 35 feet back. Color? All you’re gonna get from Desjardins on that question right now is, “dark.” He did give up that they used long (8 feet) fluro leaders because of how ridiculously clear Audubon is.

“Our largest was a 24 on cranks. Once we got that as a kicker, we knew that if we could pick up a couple of others, at least we would be in the top three,” he said.

From their “long run” of maybe ¾ -mile from the ramp, they came in with 10 minutes to spare. They’d fished all day with only a couple of other boats in the vicinity, with the second-place team ¼- to ½-mile away.  Two weeks from now DesJardins and Rasmuson will be right back at it, possibly even across U.S 83 from Audubon, when AIM heads to Sakakawea proper.

Finishing in second place and fishing close to the winners was Brian Lamb and Russ Howes, both of Watford City, near Sakakawea’s western end. They were fishing their second AIM tournament, too.

“We decided to go ahead and fish this for the challenge. We fish a lot of local tournaments and we really like the competition,” Lamb said. “I had a couple of friends who fished AIM last year and had good things to say about the camaraderie between contestants. And, most of the events are within 200 miles of my house. We never fished Audubon or in Garrison but we’ll compete there, too. It’s radically different at Garrison than the west end.”

Lamb and Howes began pre-fishing Audubon Friday evening after studying maps and deciding to concentrate on two or three spots to begin towing cranks at the rear of their 350-Verado-powered Nitro ZV21.

“We caught everything but walleye, including my first muskie. We went until dark, not seeing a whole lot. We decided Saturday we’ll go out and target where we thought they’re going to be, around the humps, bumps and the dam on the west side,” Lamb recalled. They found mostly “trash” fish until they began jigging.

“Lo and behold, we caught a 22, a 26 an a 27 in one spot. I’m like, okay, let’s leave them. We found three spots along the dam holding fish,” he said. Those would be their first Sunday go-to spots.

They ran about 400 yards from the ramp, and dropped in. The fish, he said, weren’t having any. ‘We fished for about 1-1/2 hours and moved to another spot and grabbed five 15-inchers,” he said. “We said, okay, let’s go back to the first for upgrades. We found our depth, 22 feet; that was important.”

Using Lindy-style rigs with Mack’s Lures Smile blades, and Slow Death hooks, they trolled .9 to 1.2 mph. That was the ticket. “We got our first upgrade, a 19-1/4, from the hump where we filled our card,” he said.

The next? “A 27-1/4 and we were literally releasing that fish and off when another hit for 24 and change,” Lamb said. The next would be even bigger, right? Nope.

“We fished five hours and never caught another fish,” but they had the right ones to bring home a scorecard with 19.06 pounds, worth, $2,000. Throughout the day, several other boats came by, must have gotten frustrated, and left, he said. “We stayed and ground it out. You’ve got to be there when they decide to eat. We decided we were going to make it or break it right there.” Good choice, guys.

Next, AIM hosts a twi-state double-header Sunday. Minnesota anglers, you make a visit delayed for a month by high water on the Mississippi River near Hager City. Wisconsin, you’re headed this weekend for the Lake Winnebago system. We’ll be previewing those two in a few days.

Remember, you can follow those two contests Sunday via Garmin Fish & Hunt, and to see what teams will prevail, go to our Facebook page. Visit our website for information on all AIM tournaments and how to register for all AIM events.

« Engaging Kids with the ‘Lure’ of Angling
Doctor Sonar Newsletter »