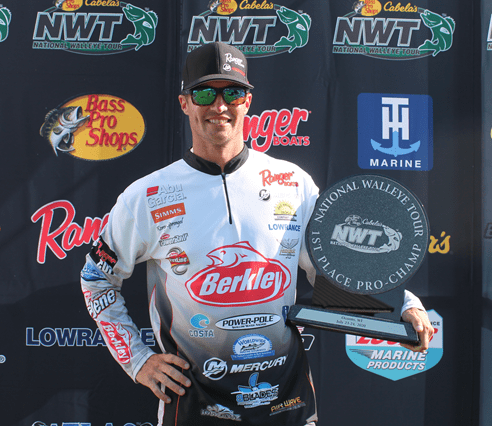 Korey Sprengel, of Beaver Dam, Wisconsin, weighed a combined total of 77.48 pounds to win the National Walleye Tour Presented by Bass Pro Shops and Cabela’s event at Oconto, Wisconsin, July 24. Sprengel won a fully rigged Ranger 620FS Pro package, an upgrade due to him being in the Ranger Cup program, with a 250-horsepower Mercury outboard, $15,000 in prize money, $1,000 from Mercury Marine and $2,636 in Anglers Advantage cash for a total of $92,130 in winnings.

For the better part of a decade, Korey Sprengel has been the most dominant walleye pro in the sport. But over the last few years, other anglers have encroached on his spotlight – namely Brett King and his quest to win back-to-back Angler of the Year titles, Tom Keenan (reigning AOY) and John Hoyer and his ridiculous three-tournament stretch (two wins, one second) to close 2019. After a delayed start to the 2020 National Walleye Tour season, presented by Bass Pro Shops and Cabela’s, Sprengel quickly and emphatically reclaimed the unofficial title of “hottest walleye stick on the planet.”

Sprengel fishes Green Bay so often he knows it like the back of his hand. Coming into the season opener, Sprengel knew the only person that could beat him was himself. With that confidence, he limited himself to only one day of official practice. Instead, he was going to trust himself and make decisions on the fly.

“The whole key this week was my first bite on day one,” said Sprengel. “With the northeast wind, I knew it was going to be a needle in the haystack. But I also knew the recipe. I just needed to know if the recipe was going to work. That first fish bit twice, if not three times. It was only like a 20-incher, but I knew if they were going to bite multiple times, there was something to be had. From there, it was all about fine tuning it.”

What Sprengel was referring to is a small 100-yard stretch up in the islands area, located roughly 30 miles from takeoff at Breakwater Park and Harbor. This rocky stretch had gobies, but more importantly it had current and warm water. The warm water was especially important and rare with the northeast wind. When Sprengel shocked the field with a 42-pound stringer on day one, he wasn’t sure the spot would hold up.

“This morning, when I put the trolling motor down and saw the color and temperature of the water, I knew I was going to win,” said Sprengel. “That sounds cocky, but the water was perfectly murky, algae stained and warm. I don’t know where it came from, but I knew that’s where I was going to live.”

With no company around initially, Sprengel made his first full pass and caught an 8 1/2, a 7 1/2 and a 6 1/2. He proceeded to catch and box another 6-pounder on his second pass.

“With 27 pounds for four fish by 8:30, I’m thinking I want to head back ASAP and get off the water as easy and safe as possible,” said Sprengel. “But I knew I needed one more bite. But with more and more company showing up, that didn’t come until noon. At one point I counted 21 boats; it was like a parking lot. I finally was able to get through the same area and caught a 24-incher. About 20 minutes later I caught another 6-pounder. I was done at 12:20 on both days one and two.”

Sprengel has had success both with the innovative casting methods as well as traditional trolling. This week, all 10 of his fish came via trolling crawler harnesses.

Steve Atkinson, of Sault Ste. Marie, Michigan, took home top honors in the co-angler Division with a total weight of 57.67 pounds. On day one, Olson fished with Jacob Kaprelian for a limit worth 22.97 pounds. The final day he fished with Ryan Dempsey, and together they weighed five walleyes for 34.07 pounds. Atkinson earned $7,186 for his win.

The next stop for the NWT is set for August 13-14 at Sault Ste. Marie, Michigan.