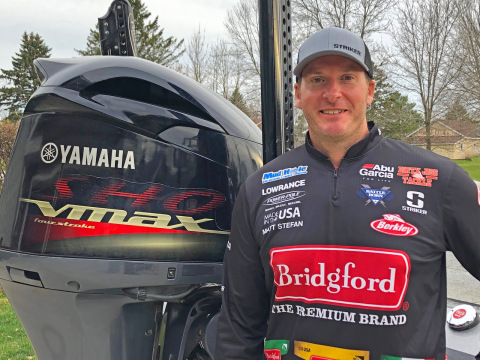 KENNESAW, Ga.–Prior to turning full time FLW® pro five years ago, Matt Stefan made a living assuring commodities such as soybeans and gold were being traded in a fair and ethical manner. It’s no surprise the Wis. pro was quick to recognize the financial opportunities within the Yamaha Power Pay contingency program for tournament anglers, which has already paid anglers roughly $20,000 since its launch.

“I can’t remember if I first heard about Power Pay on social media or on an angling site, but as a longtime Yamaha owner, I could tell as soon as I learned more, it is an awesome program,” said Stefan. “The best part is it’s free to sign-up, and you don’t even have to win your event to get the Power Pay money.”

Stefan has already collected $1,500 in Yamaha Power Pay money in 2020 on the FLW® Tackle Warehouse® Pro Circuit, finishing fifth at the Harris Chain of Lakes and twentieth at Lake Martin. Although, he admits his dream day of bass fishing would take place near his home at Sturgeon Bay, Wis., where 30-pound limits of smallmouth are achievable in May and June.

“I’ll be honest, I’ve had offers from other outboard manufacturers for sponsorship deals, but I continue to buy my Yamaha outboards through my local dealer,” continued Stefan, whose total career earnings as a Yamaha angler come close to $500,000. “Yamaha is all I’ve ever run. I just have so much trust and confidence in my Yamaha V MAX SHO® that I’ve never wanted to risk running anything else.”

When asked what he loves most about his V MAX SHO, Stefan rattled off pretty much every important feature anglers and boaters seek from their outboard.

“It’s a four-stroke engine that performs like a two-stroke, with tremendous reliability, great hole-shot, awesome top-end speed and no dealing with oil. It’s truly an incredible engine, and all the guys I know who run one are fired-up about registering for the Power Pay program,” said the Wisconsin pro.

For more information, complete terms and conditions or to register for Yamaha Power Pay like Matt Stefan, visit yamahapowerpay.com or email Chip with questions at Chip@DynamicSponsorships.com.