Walters Gets to Know the Storm® Arashi® Glide Bait During Quarantine 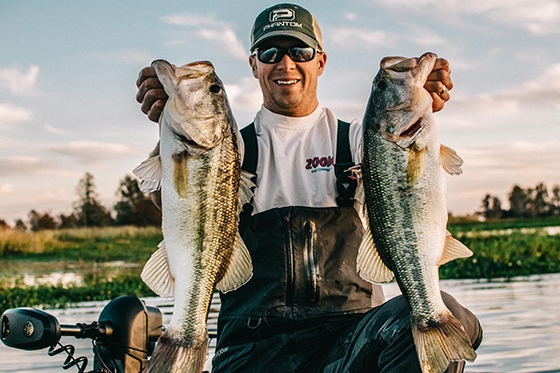 With the Bassmaster Elite Series on hold due to coronavirus concerns, South Carolina pro Patrick Walters has been using his downtime to dial in a big-fish bait he’s confident could someday win him a tournament – the Storm® Arashi® Glide, a 7-½-inch, single-joint, hard swimbait with a replaceable soft tail.

“That’s the bait I’ve been mesmerized by lately and have been playing with a lot,” says Walters, a Rapala® pro (Storm is a Rapala Respected Brand). “It’s got draw power and big-fish potential. So I want to learn it well, so when a tournament comes up where they’re biting it, I’ve got the confidence to pull it out.

“I truly believe I’ll be able to win a tournament on it,” he continues. “Maybe not a multi-day Elite Series tournament, but like a one-day tournament back on the home pond.”

“When you’ve got this much down time, you get to where you’re like, ‘I’ve caught these fish on this bait already – been there, done that,’” Walters explains. “I am very grateful to be out catching fish, yes. But it gets to the point that you want to learn something new. So I picked up that Glide and I’ve been learning it, getting more familiarity with it and building confidence with it.”

And he’s been catching big bass with it, both on Santee Cooper and Lake Murray.

The excitement of hooking a big fish on a big bait is incomparable, Walters says.

“I mean, I’ve caught 7, 8, 9 10-pounders, and those are exciting fish to catch. But when you get one to bite a different style of bait that you’re still developing confidence in – and it’s such a large bait – it gets you hollerin’.”

Swimming with an exaggerated motion that draws in fish from long distances, the Arashi Glide delivers a consistent and stable glide action at both fast and slow retrieve speeds. Similar-looking baits often glide effectively only at one retrieve speed. Not mention that similar baits often cost twice as much or more. But the Glide is a big-fish bait that doesn’t cost big bucks.

“If I’m paralleling a dock, with a quarter turn of the reel handle I can twitch it to the right, then I can do a half a turn to make it go left and it will scoot that bait almost under the dock,” Walters says. “You can truly walk that sucker right up under there. I didn’t know that before. That’s the kind of stuff I’ve been learning, throwing this thing in my downtime.”

Walters throws Arahsi Glides with an 8-foot heavy-action baitcasting rod spooled with 20-pound Sufix® Advance® Fluorocarbon line. Anglers who use dip nets could throw Glides on lighter line and “get a little better action,” Walters says. But because the Elite Series doesn’t allow nets, he says, “If I hook ‘em, I’m going to winch ‘em in, and I’m going to try to boat-flip ‘em.”