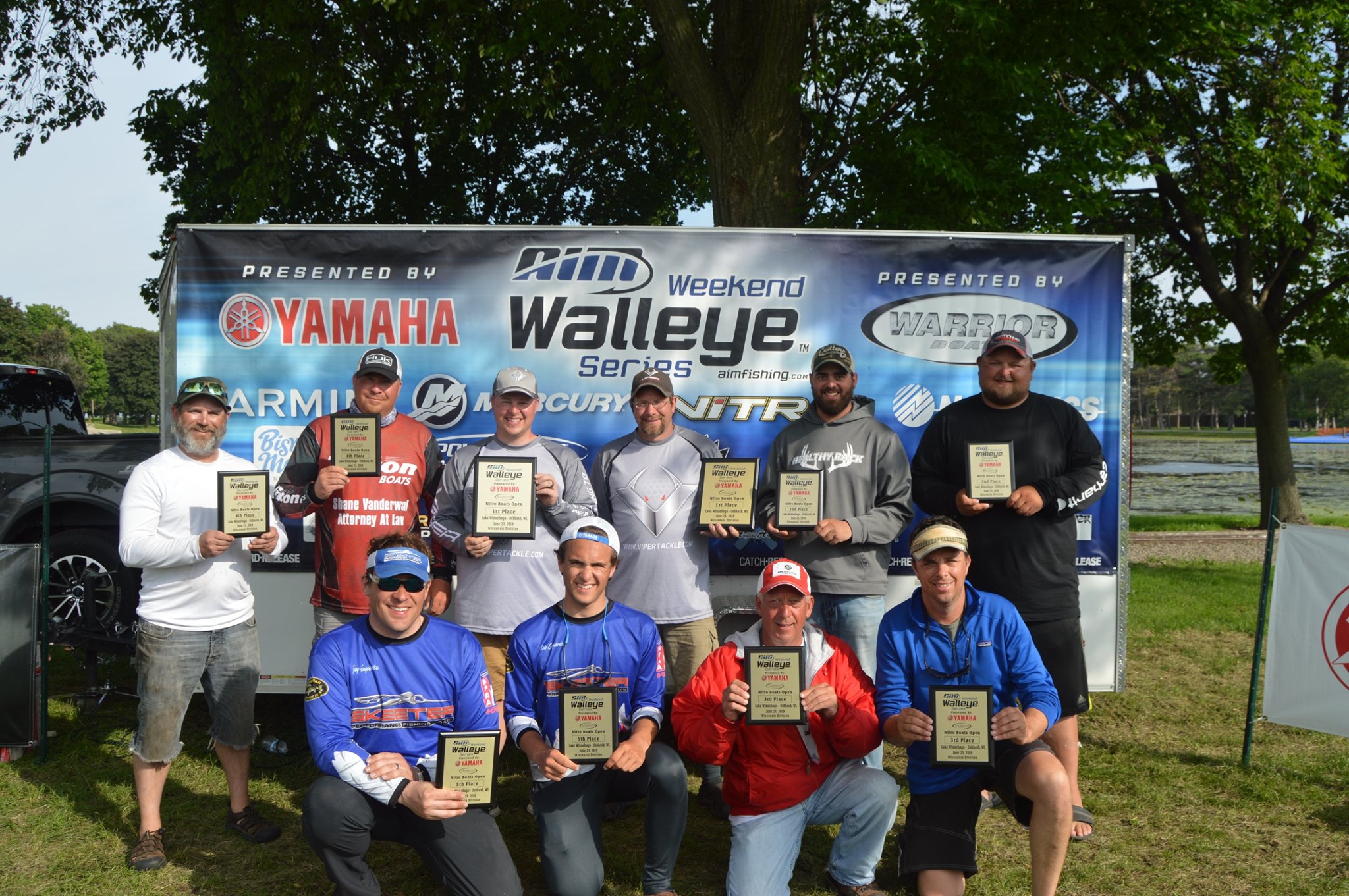 FOR IMMEDIATE RELEASE:  June 26, 2019 Where do you go when fish are scattered across an entire lake and river system, but you need the big-uns to win that $8,000 first place cash in the last AIM Weekend Walleye Series Nitro Boats Open Wisconsin qualifier of the season? Ask Chad Wiskow and Josh Wallace.

Relying on 20-plus years of fishing ‘bago, Wiskow, of nearby Neenah, and partner Josh Wallace, of DePere, went to a spot Wiskow said many anglers would drive right over on the Wolf River, besting 99 other teams to win with 29.30 pounds, and boosting their ranking in Team Of The Year standings, too.

“It’s hard to believe that our Wisconsin qualifiers are over, and it’s on to the championship in Marinette Aug. 23-24, but Wiskow and Wallace showed us all how it’s done on ‘bago,” said AIM National Tournament Director Denny Fox. “This was their first AIM win, and they won it going away, topping the second place team by over 10 pounds.”

Here’s the how, the where and the with what: with 16, 14 and 10-foot cane poles; leeches and crawlers on Viper slither rigs, slow death hooks, and Northland butterfly rigs on bottom bouncers; both up and down current, at .8 to .9 mph. It’s a setup often used on the Wolf River above Winneconne and the entire Winnebago system. Half their hits, he said, were on crawlers, and the other half, leeches. Now, the dirty details.

Wiskow, who took second on the first AIM tournament of the year in 2018, credited lots of scouting around the system for finding the winners. That, and sticking with their plan.

“We knew some were finally filtering back down from their spawn. With water temperatures staying as cold as they have it was hard to get the bigger fish to go,” Wiskow said.

“Usually they’re snapping pretty good,” he said. “But everything was so lethargic. With the bigger fish you have to give it slow or you won’t be getting those bites.”

“There are a lot of fish in the lake, and I had to find those still migrating back down. I had my partner go down and check the south end of the lake, and he found a pile of fish, but nothing that’s going to win the tournament,” he continued.

That left him two options, hitting the system’s famous cane beds, or going up river. He checked the beds first. “I figured I’d go up and bump around the beds. We must have fished 40 different beds in two days and caught two fish. So I said ‘Josh, you know what, I’ll go back and check a spot where there if there are big fish filtering through they’ll stop to bulk up,” Wiskow said.

That meant the Wolf, and a spot upriver from Winneconne he had filed away in his memory banks. Just a small trough between two flats, with lots of stones, weed patches and branches. In other words, perfect walleye ambush feeding spots.

“It’s a spot that’s very out in the open, one where you’re watching tournament boats just drive by. We made two passes and pulled three over 20 inches and lost two others. So I said, let’s get outta here. Saturday we left it alone, and continued to fish more cane beds,” he said.

With the weather iffy Sunday morning, Wiskow was concerned. If the rumbles popped, the fish in that trough probably wouldn’t. “I looked at Josh and said we had to make a pretty good drive, a 45 minute run there. We stopped at one cane bed to see if we could put something on the card. We caught perch, bluegills and finally rolled a 19-inch walleye. We stayed there, then the winds came up and it wasn’t fishable anymore.

They decided to try their trough. You guessed it.

Then that old voice-in-your-head worry tape started playing for him. Wondering what the rest of the field was doing, even though they saw only two other tournament boats go farther up the river, and one local who tagged along in their spot but didn’t stay. The spot was theirs.

“We worried because there are some really good sticks in the AIM tournaments. We kept upgrading slowly throughout the day, and lost another couple of good fish, and got to the point where our 19-3/4-inch fish was the smallest,” Wiskow said.

Then, one cane pole popped. “When she rolled on the surface and dove back down, Josh scooped it in the net, and put our last 24-incher in the boat. It was 1:25 p.m. and we headed back to the dock,” he said.

“I looked at Josh and said, ‘I’ve been fishing this system over 20 years and you just don’t tumble into fish of this quality every day. If this doesn’t seal the deal, I’m still going to hang my hat high and feel good,” Wiskow said.  He thought they were coming back to the dock with about 24 pounds.

“I added the card up and looked back at Josh and said, ‘there’s a little more here than I thought. At that point, I said if it’s gonna be, it’s gonna be,” he said. And, it was.

Wiskow is fishing both the Wisconsin and Minnesota state qualifiers this year, finishing 10th on Mille Lacs June 9. And he’s locked and loaded for the Wisconsin championship at Marinette in August, where he’s familiar with the water. “Very familiar,” he added slyly.

“I’m taking a full week off work for the championship because we might have a shot,” he said. And, why does he fish AIM?

“When we first got involved in AIM, we fished the first tournament and I really enjoyed the Catch-Record-Release™ format. I don’t have to handle fish and don’t have to worry about chasing post-spawn or pre-spawn fish. Everybody’s on the same playing field and that is a huge thing for me,” Wiskow added. “The conservation end is huge.”

Finishing in second with 16.84 pounds, good for $2,400, were Tyler Mueller, Appleton, and Dylan Koehler, Hortonville. They got their fish on rock piles along Winnebago’s western shore with leeches and crawlers on jigs and hooks using slip bobbers.

In pre-fishing with his father, he put a plan together to fish structure. Because of the possibility of rain, they wrote off the lake’s mud flats. They too went up the river and caught fish, but chose Winnebago.

“We had a few spots and when we stopped getting bit, we moved to the next rock pile,” Mueller said. “We probably caught about 15 fish and at the end of the day our smallest was 19-3/4 and the biggest we weighed was a 22.”

“We started at the north end and fished all the way down to Oshkosh, and probably stopped at five or six different spots. With the east wind blowing for several days in a row, it helped position the fish,” he added.

Mueller and Koehler also will be at Marinette. “I know it fairly well. Better than some. There’s still a chance there could be big fish in the mud there. It will all depend on the weather,” he added.

Here’s how the rest of the top five rounded up. In third, with 16.58 pounds, and cashing an $1,800 check, were John Geiger and Taylor Olson, both of Neenah. Grabbing fourth place and $1,500 for 15.59 pounds were Sam May, Rhinelander, and Nathan Hurlbutt, Appleton. In fifth and earning $1,300 for 15.50 pounds, were the father-son team of Guy and Cole Engebretson, both of Wausau.

Ok, Fan Nation. Next up after this weekend’s twi-state double header in Minnesota and Wisconsin, is this weekend’s Sunday, June 30, tussle on giant Lake Sakakawea in North Dakota, that state’s third championship qualifier. We’ll have a preview of what to expect.