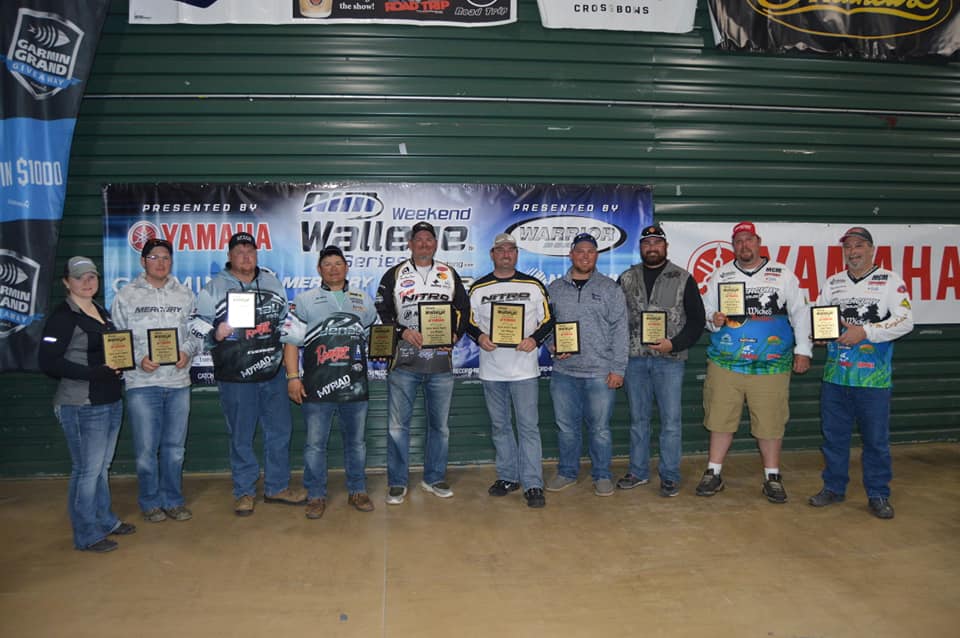 Okay, winning on Sunday (April 28) for teammates Joe Schneider and Brian Daun was definitely a big deal when they took first place by more than three pounds at the AIM Weekend Walleye Series Nitro Boats Open at Winneconne, the second of four Wisconsin qualifier tournaments.

But that “big deal” part grew pretty quickly, when, on top of the $7,750 they earned for boating 20.62 pounds from both the river and Lake Winnebago, they realized that because they did it in Brian’s Nitro ZV21, powered by a Merc 350 Verado (Joe owns its twin), that boat-motor combo brought them another $5,000 in Nitro Cash.

But wait, there’s more, as they say. Because they did it holding Fox River Rods, they rang up another $300. Grand total: $12,850 for a day’s fun on the water. Not to mention being in a majorly good position for a shot at a new Navionics chip come Big Fish Thursday with their biggest. Now the details. Or at least, as much as they’ll tell right now.

Where’d they find all that cash in the water? Well, that’s another story, best told after another major upcoming tournament in the same water May 2-3. But, Schneider was able to tell us a few things without divulging their go-to spots, of which there were several, since they both trolled and jigged to get the deed done.

“We fished the main lake and in the river, and didn’t have one set spot. We had multiple, and with the wind and high water it played to the different spots we had. We didn’t go up the Wolf; too much dead time to do so,” Schneider said. That was true for most of the field Sunday.

Schneider, from Van Dyne, WI, and Daun, from Hilbert, finished fourth last year here, and finished AIM’s 2018 season in second for the coveted Yamaha Motor Corp USA Team of the Year. This win is a great way to jump into the TOY contest this year.

They started off the first hour and had only dinks, but the water was seven degrees colder than a few days prior, and as the water warmed, so did the fishing, Schneider continued.

“I believe a couple hours into it, we got a 21-3/4-incher and for this system that’s a keeper, and later on they caught what put them over the top, a 27-3/4-incher. That’s a very good fish. You don’t get too many of those on the Winnebago system. I am hoping it was the biggest fish of the tournament,” he said. “That one fish was 8.8 pounds.”

After that honker, he said, that spot died out, so they moved and switched to pulling flies. “There’s a lot of small walleyes coming down the river, so we went to our second spot and filled the card with 15-inchers. We set a plan to go at least an hour there, and in our third spot we upgraded about four or five pounds. We moved around a lot and Brian was on very good fish earlier in the week so we knew we had a pretty good chance going in.

“We knew last year, 24 pounds won it, but we’ve seen guys win tournaments here with 12. It was a very, very tough bite for a lot of boats. We knew we had a top three for sure but didn’t know if someone got lucky on the Wolf (River). This is one that’s very hard to win because everything changes day by day. It’s hard to put a pattern together,” Schneider said.

Schneider said he and Daun trolled, jigged, and pulled flies. “We didn’t have one set thing we were doing. If trolling wasn’t working we weren’t just sitting around trolling. We changed. We tied on more rigs Sunday than someone normally likes to do.”

That ability to change with each situation, and adapt, got them there.

In second place with 17.14 pounds, good for $2,400, were Lynn Niklasch, Oconomowoc, and Mark Kumorkiewicz, of Pleasant Prairie. You may remember them. They won AIM’s National Championship Shootout in 2015, finished fifth here in 2016, and scored two fourths on Winnebago and Green bay in 2017.

Niklasch said most of his pre-fishing was running his Merc 250 Verado-powered boat around Lake Winnebago looking for those five bites.

“We also spent a little time trying to find a nursery to get one or two smaller ones. We ended up with nine spots but they weren’t kicking up a limit. You might catch one here and there so we went out in the morning fishing what had been most consistent, along the shoreline.

“There was no wind so we moved out targeting more like nine or 10 feet of water rather than five or six,” he said. When the wind began picking up, they headed to other spots closer to shore.

“We were on our fourth or fifth spot and it was about 11:30 before we had our first fish. We’d get one or two passes at each, and it was time to come in,” he said. He trolled No. 5 Flicker Shads, Shad Raps and Flicker Minnows, but the one that brought in all the fish—as in, all—were Salmos.

“They were in random colors in about five feet of water. We were running off our boards in 15 or 20 feet back and we were trying to target about four feet down. If I had to say a key, it would be metallic on the sides.

Rounding out the other top five happy spots were Anthony Englebert, Little Chute, WI, and Dylan Peotter, of Kaukauna, who pocketed $1,700 for 16.88 pounds and third place. In fourth, winning $1,400 for 16.08 pounds, were Nick Heelein, Genoa City, and Jason Mata, Plainfield, and taking home $1,300 for fifth with 14.48 pounds were Michael Denis and Cassidy Holtz, both of Krakow, WI.

Next up, it’s a double-header, with events May 12 in both New Town, North Dakota, and on the Mississippi in Hager City (watch for high-water-related updates for this event), followed May 19 by the AWWS’ first visit to Green Bay at Marinette, WI. Gear up, and get ready.

For updates on all events, go to our Facebook page, and for information on all AIM tournaments and how to register, go to our website. 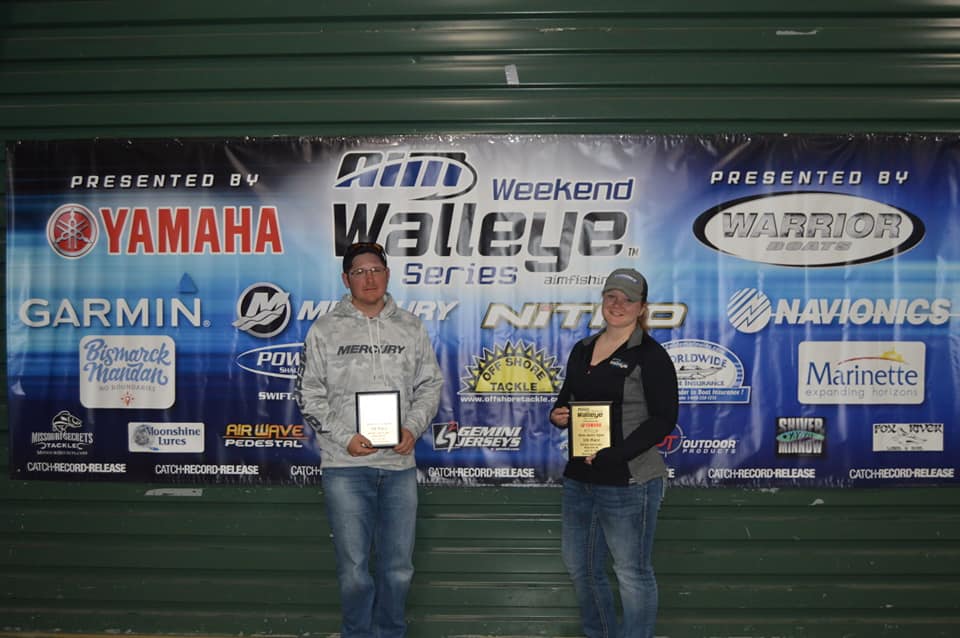 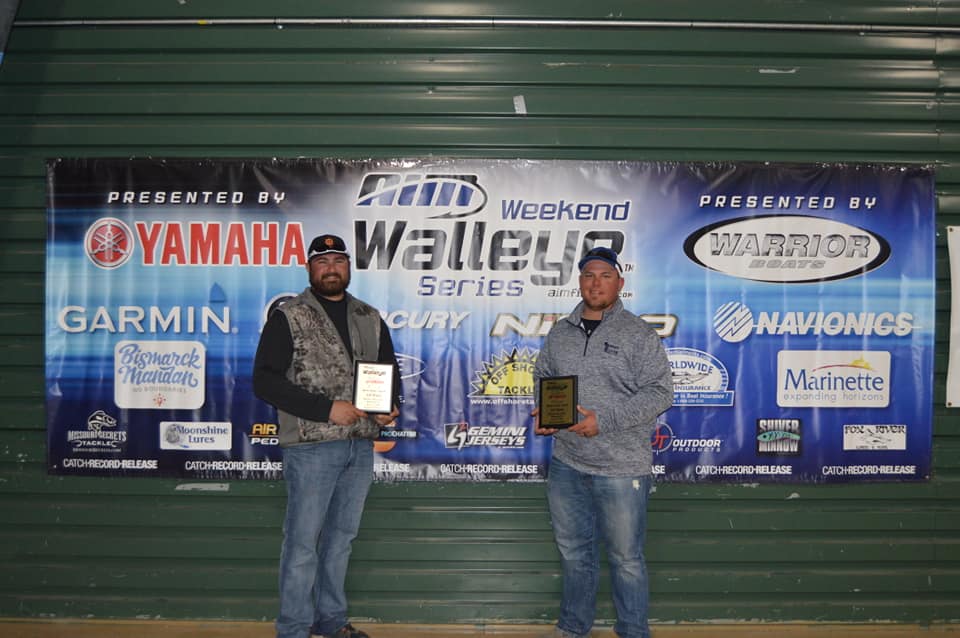 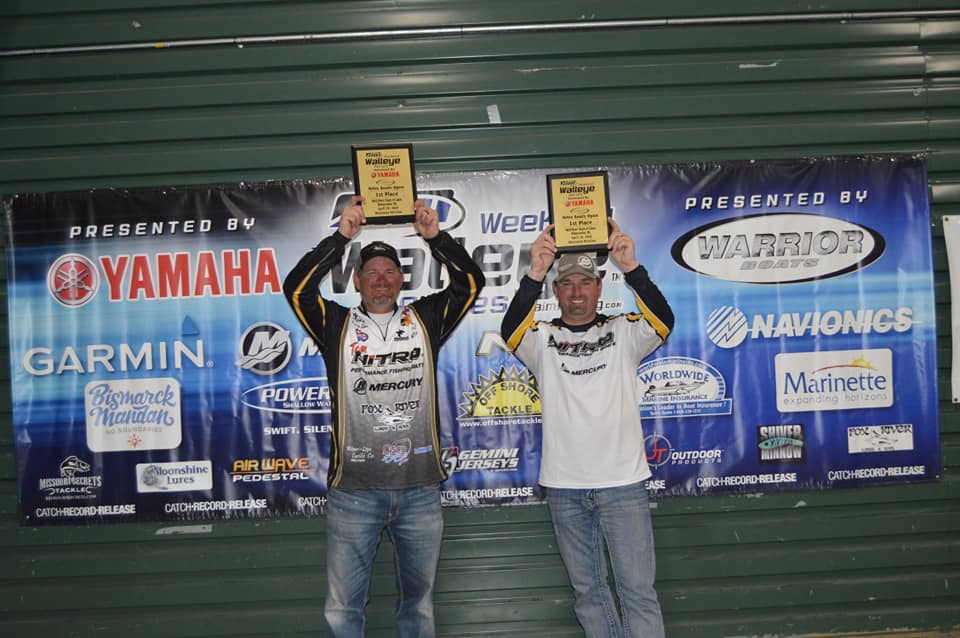 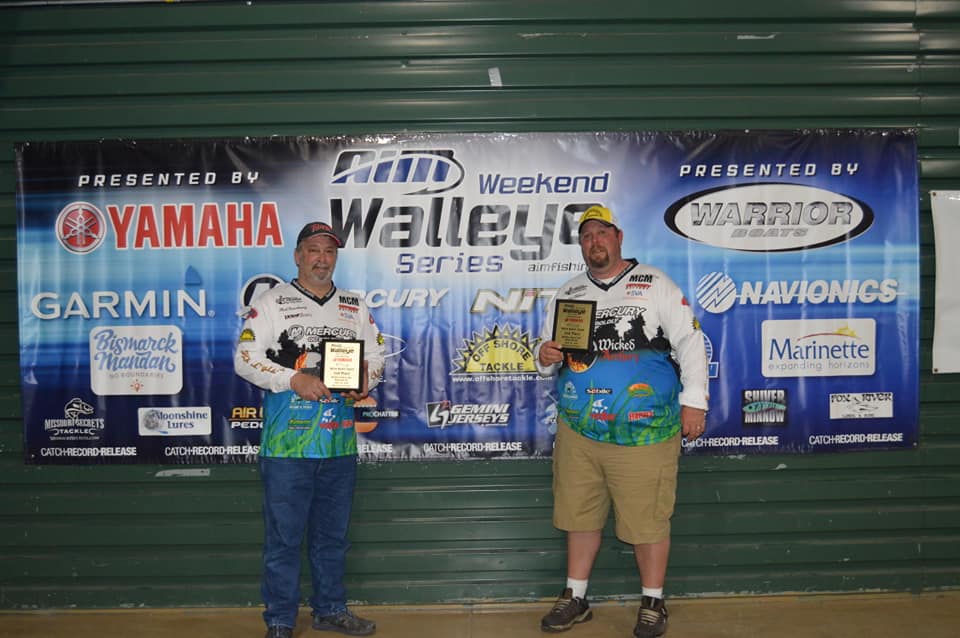 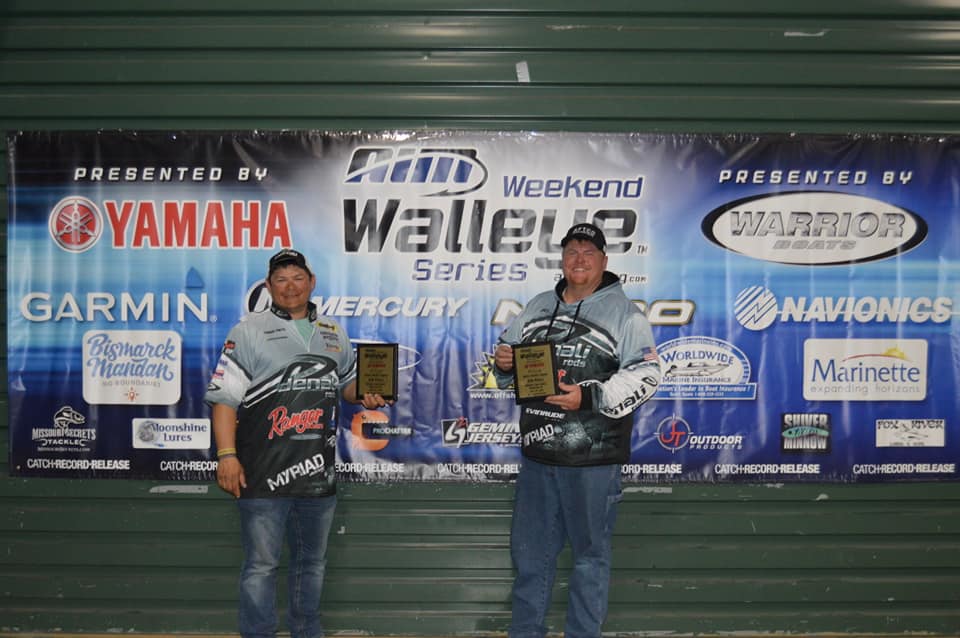