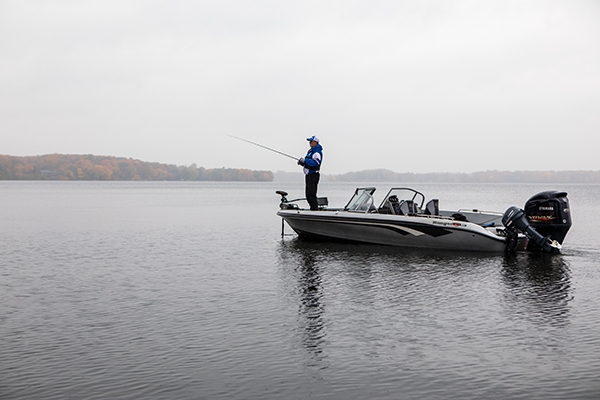 Yesterday’s trip was a reminder of how fall fishing really differs from every other season.

We’d launched on a natural lake with water clarity of about five feet. Our plan was to look for active fish; crappie, largemouth, or walleye.

Besides being on a new lake, we were also on the back end of a cold front that sent air temps plummeting from 88 degrees to 43. I feared this would drop water temps into the low 50s and trigger turnover.
The turnover changes everything on bodies of water that form a thermocline. It occurs when the well-oxygenated upper layer of a lake cools in fall and mixes with the cold, non-oxygenated lower level.

Short-term, the turnover shuts fishing down, which is why I was glad to see water temps in the low 60s. There is good news… the effects of the turnover last only a few days before things stabilize and fishing improves.

Fall’s Two Seasons
Think of fall as two seasons: pre-turnover and post turnover, and approach each separately. Your challenge will be finding fish.

In early fall, fish shallow as shallow cover loads with both shallow fish and those deep-to-shallow fish that move in as the turnover nears.This is especially true with bass.

If a lake has vegetation, broken grass tops often float to the surface in early fall, where the wind pushes them to shore and forms floating mats that hold bass in water as shallow a foot. Flipping these mats with a ¾- to 1-ounce pegged punch weight and a soft plastic like a tube or creature bait can be awesome.

Docks are also key, as are grass flats and weedlines. I’ve found shallow-diving squarebill and lipless cranks fished fast are deadly in early fall as they can be fished over the tops of grass. Topwaters can also be incredible when conditions are right.

For crappie, I find the outside weedline best in early fall. Work the edge with a small jig tipped with a minnow or soft baits like a Gulp! Minnow fished on light braid for sensitivity. Crappie are one of the first to move deeper as the fall progress, so key on grasslines that drop into deepest holes.

Shallow grass and gravel is also key for fall walleye. I love running medium diving cranks over flats running 6 to 12 feet this time of year. Jigs fished with soft plastics like a minnow, curl tail grub or shad body are also a great option.

Post Turnover
After turnover, the entire system changes once surface water mixes with the non-oxygenated lower level. The days immediately following turnover can be tough as fish move as conditions change, and the bite is off even when you find fish because of the instability.

Your challenge is relocating the fish, which now have access to the entire lake, including the deep water that was uninhabitable once the thermocline formed.

Crappie are the easiest fish to find in late fall. Look for them to hold in deep holes, where they will generally suspend in 35 to 50 feet of water. Horizontal-viewing sonar like Garmin® Panoptix LiveScopeTM makes it easier to locate these roaming schools.

Once you locate a school, go to a vertical presentation and fish small jigs tipped with a soft plastic (small tube, minnow or creature) or a live minnow, and target the fish holding at the top of the school. Horizontal ice fishing jigs like the Johnson Johnny Darter are also a superb choice.

Walleye also move deep in late fall, holding on deep structure where they are visible on sonar. These fish are feeding heavily, but won’t chase fast-moving baits. Large live minnows fished on a live bait rig with a two-foot leader to pin the bait is ideal. Jigs and minnows are also good, as are horizontal ice jigs like the Jigging Rap®.

In late fall, bass also are less apt to chase fast-moving baits, and they, too, love bigger offerings. Jigs, tipped with low-action soft plastics like chunks, can be deadly. I like to fish ⅜- to ½-ounce jigs in the fall, working them slowly.
Late fall bites are light…the bait becomes “heavy” so I turn to 30-pound braid for sensitivity and tip it with a 5-foot leader of 15-pound fluorocarbon for line sink and invisibility. This time of year, bass congregate in areas like inside turns that offer easy access to both shallow and deep water.

If fishing vegetation, make sure it’s green and healthy as dying vegetation no longer produces oxygen which pushes bass to other cover.

So how was fishing yesterday? Well, the crappie bait was terrible, but we found superb numbers of big bass on shallow, weed-covered flats. Lipless cranks produced more than two dozen before heavy rain pushed us off the lake. Y