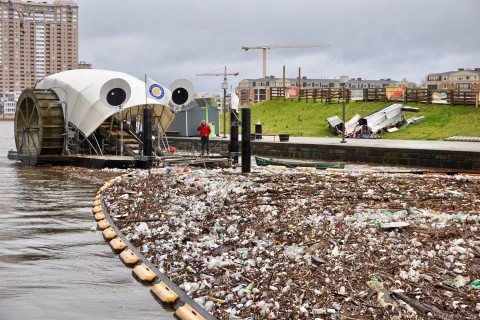 Mr. Trash Wheel®, created by Clearwater Mills, has become famous in recent years for all but eliminating floating debris in the Baltimore Harbor. Through the Yamaha Rightwaters™ sustainability program, Yamaha Marine and Clearwater Mills will jointly design a device for removing plastics and other floating debris from coastal stormwater systems in coastal Georgia. The Yamaha/Clearwater device will be land-based and electrically-powered, while Mr. Trash Wheel® is moored, buoyant and primarily powered by natural water flow. (Photo credit: Waterfront Partnership of Baltimore)

To date, Mr. Trash Wheel® has prevented 1,200 tons of debris from entering the Harbor, the Chesapeake Bay and the Atlantic Ocean. Because of the success of Mr. Trash Wheel®, Baltimore has added Professor Trash Wheel and Captain Trash Wheel; a fourth Trash Wheel is in the works for the Harbor. Yamaha and Clearwater Mills plan to deploy the new Yamaha Rightwaters device in coastal Ga.

“The challenge we face with the Yamaha Rightwaters design is to ensure it operates efficiently where water flow is inconsistent,” said John Kellett, President, Clearwater Mills. “If we can make this pilot project work, we will have created something we can use to keep debris out of marshlands, coastal waterways and off the beaches all along the Atlantic Coast.”

“Part of why Mr. Trash Wheel is so efficient is its location – a river that feeds a harbor. The beauty of the device we’re developing is that it’s designed to collect debris at a critical point before it disperses into a larger body of water. Together with Clearwater Mills, officials from Glynn County and the City of Brunswick, we’ve identified the point in the stormwater system where we can capture the greatest amount of debris,” said Martin Peters, Yamaha Marine Division Manager, Government Relations. “Now we enter the design phase. Our role at Yamaha is to integrate the power and electronic control systems for the device. Our Yamaha Marine Boat Power Systems Advanced Development Engineering Team will take on that part of the project.”

The proposed location for the device is a spillway that drains stormwater from a large residential and commercial area of Glynn County into the adjacent estuary. Water depth over the spillway can vary from several inches to as much as 18 feet, depending upon rainfall intensity and duration in the area. Yamaha, Glynn County, the City of Brunswick and Clearwater Mills aim to have a working prototype installed in the waterway by the second quarter of 2020.

“Georgia is home to 1,800 Yamaha employees, and that’s why we have started here,” said Peters. “If the pilot project goes well, we’ll work toward finding ways to install similar devices nationally. For us, the end game is cleaner water everywhere. Debris transported by stormwater contributes to ocean microplastics pollution, injures sea life and is a hazard to navigation. We invite anyone who boats and fishes to get engaged in existing projects to keep debris out of our waterways.”

Yamaha Marine products are marketed throughout the United States and around the world. Yamaha Marine U.S. Business Unit, based in Kennesaw, Ga., supports its 2,400 U.S. dealers and boat builders with marketing, training and parts for Yamaha’s full line of products and strives to be the industry leader in reliability, technology and customer service. Yamaha Marine is the only outboard brand to have earned NMMA ®’s C.S.I. Customer Satisfaction Index award every year since its inception.