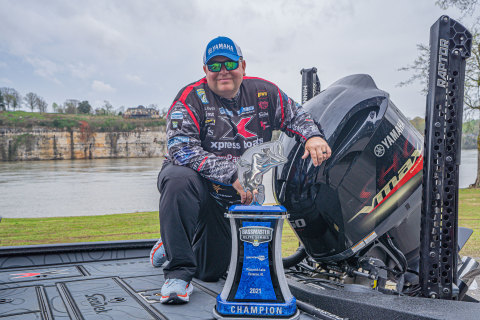 Veteran Yamaha Pro Bill Lowen weighed in 20 pounds, 11 ounces on the final day of the Bassmaster® Elite tournament on Pickwick Lake to capture first place with a four-day total of 83 pounds, 5 ounces. The victory marks the first B.A.S.S.® win for the angler from Brookville, Ind. The Xpress Boats Pro’s performance led him the first-place prize of $102,000.

The only competitor to break 20 pounds three of the four days, Lowen placed third on Day 1 with 21 pounds, 3 ounces and improved to second a day later by adding 23 pounds, 13 ounces. On Day 3, Lowen came in with a limit of 17 pounds, 10 ounces that put him in a first-place tie. On Tuesday, he edged out second-place Brock Mosley by 2 pounds, 10 ounces.

“I had to pitch way up in there so the bait could get down in the current and sweep it through,” Lowen said. “I felt my jig get into a limb or a piece of brush, and as I hopped the jig over I felt the bite. I hesitated because I wanted to be sure, but when I got big pressure, I set the hook and it was game on.”

Lowen described that emotional catch: “There were so many feelings going through my head. You could hear me screaming and hollering – and that’s not me. But that’s 14 years of excitement built up for this day. It all came out.”

“The first morning of the event I ran down there and saw what was going on, and I said, ‘These fish have to slide to the sides — whether it’s on the island where I was fishing or the docks on the other side.’ Fortunately, when I pulled up and started flipping trees, I got a bite, which keyed me in.”

That pattern worked for three days, but in the final round, falling water had drained much of Lowen’s prime habitat.

“Anytime I’m fishing current and I can keep a flipping rod in my hand, that’s my comfort zone,” Lowen said. “I grew up on the Ohio River, which looks just like (Pickwick) when it’s flooded. I’m used to rising, muddy water; it doesn’t affect me or make me get spun out. I just went out and fished the way I’d fish at home.”

The next Elite tournament will take place on the Sabine River in Orange, Texas, April 8 through 11.

Yamaha Marine products are marketed throughout the United States and around the world. Yamaha Marine Engine Systems, based in Kennesaw, Ga., supports its 2,000 U.S. dealers and boat builders with marketing, training and parts for Yamaha’s full line of products and strives to be the industry leader in reliability, technology and customer service. Yamaha Marine is the only outboard brand to have earned NMMA®’s C.S.I. Customer Satisfaction Index award every year since its inception.

This document contains many of Yamaha’s valuable trademarks. It may also contain trademarks belonging to other companies. Any references to other companies or their products are for identification purposes only, and are not intended to be an endorsement.