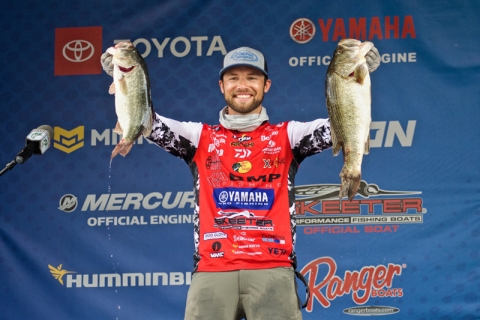 Yamaha Pro Brandon Palaniuk weighed in 21 pounds, 11 ounces on the final day of the Bassmaster® Elite tournament on the Santee Cooper Lakes to capture a win with a four-day total of 72 pounds, two ounces. The victory marks the fifth overall B.A.S.S.® win for the 2017 Angler of the Year from Rathdrum, Idaho, and the second win in 2020 alone (he also took home the trophy on Lake Champlain in August). His performance earned the first-place prize of $100,000.

“This one is so unexpected,” Palaniuk said. “Every single one I won before, I had a good practice and I knew that I would have a shot at the Top 10 and a shot at the win. This one came out of nowhere.

“Santee Cooper can be a treacherous place to navigate so having the right equipment you can rely on is key. Knowing my Yamaha is going to get me there and back every time allowed me to focus on going for the win.”

Spending his tournament in Lake Marion, Palaniuk attributed his final-round success to a pre-launch decision to start in the mouth of the Potato Creek area. Having started there on Day One, he had a feeling the area was ready to reward him again. Palaniuk caught a lucky break that he exploited when he saw a big fish blow up just out of casting range. Idling toward the commotion, he spotted a brushpile he had not found earlier in the week.

“I think it came down to versatility; that’s why I was able to have the kind of day I had,” Palaniuk said. “Without that big one on the drop shot, without those two I caught this morning, I wouldn’t have been able to win.”

Palaniuk overcame a Day One penalty of two pounds, four ounces for inadvertently making a cast with six fish — one more than his legal limit — in his livewell. Palaniuk self-reported the infraction.

“One of the things I say a lot is, ‘Control the controllables,’” said Palaniuk. “When I do something like that, it bothers me because it’s something I can control and I knew this event was going to be so tough that two pounds is not something you want to be giving up.”

Hailing from Queensland, Australia, Jocumsen took the Day One lead by catching the event’s heaviest sack — 25 pounds, eight ounces. He slipped to second on Day Two and regained the top spot on Saturday with a four-fish bag that weighed 12 pounds, 11 ounces. On Sunday, Jocumsen missed his limit again and weighed four bass for 13 pounds, eight ounces and tallied 64 pounds, two ounces. In addition to his second place earnings from B.A.S.S., Jocumsen took home an additional bonus as Yamaha Power Pay angler.