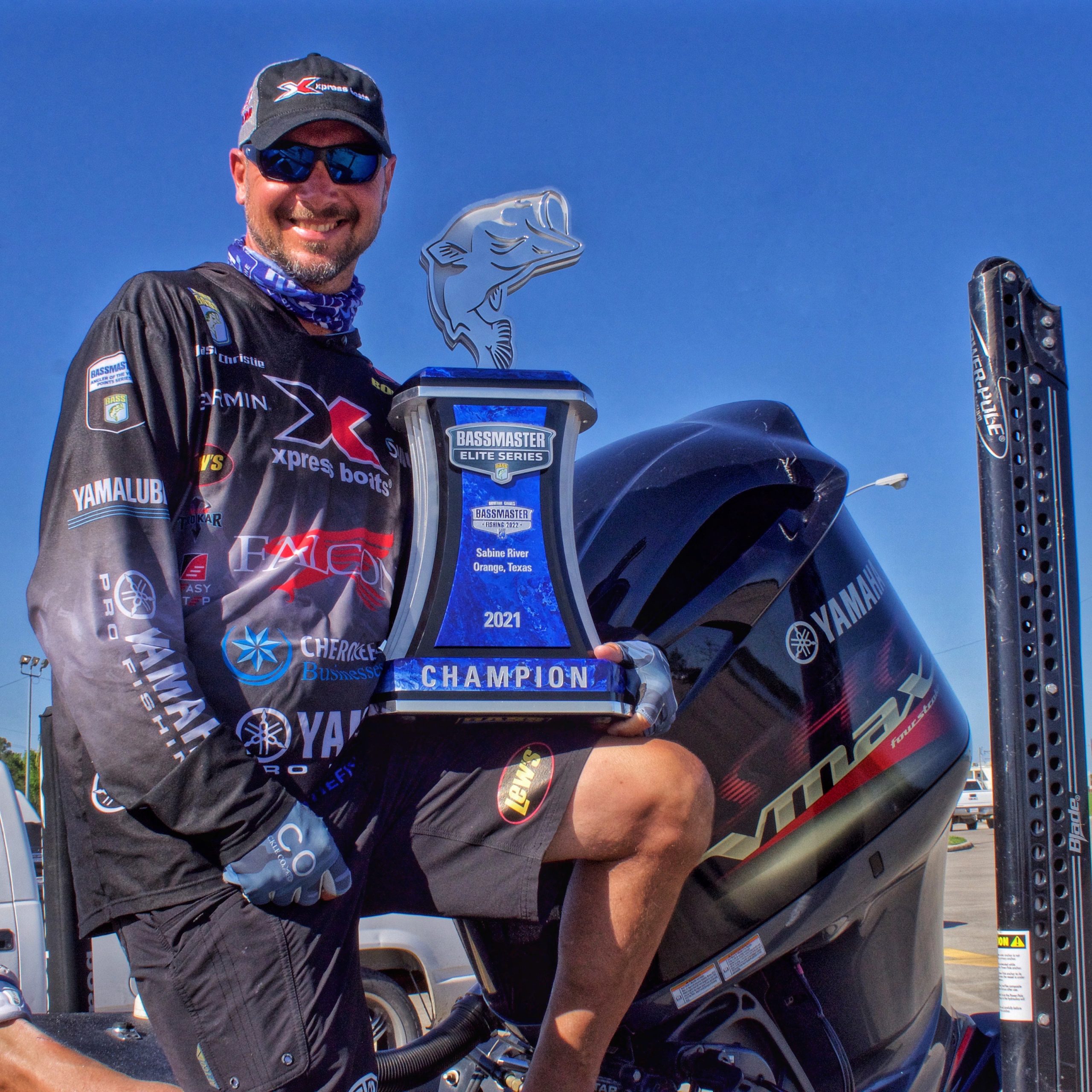 Yamaha Pro Jason Christie weighed in 8 pounds, 4 ounces on the final day of the Bassmaster® Elite tournament on the Sabine River to capture his sixth Elite series win with a four-day total of 43 pounds, 15 ounces. The victory marks the Park Hill, Okla. angler’s first win as a Yamaha/Xpress Boats Pro.

Christie started the tournament with a second-place limit of 15 pounds, 1 ounce on Day 1, then took over first on Friday by adding 13 pounds, 14 ounces. He maintained the lead on Day 3 with 6 pounds, 12 ounces and brought home the trophy on Sunday, edging out the second place finisher by only 1 pound, 6 ounces.

For four days, Christie committed the majority of his time to a narrow creek about two hours upriver from takeoff. Locating the spot in practice, Christie recognized its mix of shallow wood and cut banks as prime bass habitat, while the distant run discouraged all but one competitor from fishing the area.

“There’s a lot of backwaters downriver from this area, but then there’s like a 20-mile stretch where there’s nothing until you get to this spot,” Christie said. “The first two days of the event it was super treacherous to run; there were logs, sandbars, stuff like that. That’s what kept people from going up there.”

After two strong days of skillfully picking apart the visible cover, Christie returned to his spot on Day 3 to find it six to seven feet deeper. Increased water releases from Toledo Bend Dam swelled the upper Sabine and inundated his creek.

While Christie’s 21-foot Xpress aluminum boat was ideal for the shallow habitat he fished, fuel management was essential for ensuring he could make the return trip. After a strong Day 1 performance, he had to allow for the weight of a cameraperson and gear.

Carefully calculating his fuel plan and running time, Christie allowed himself a generous return window each day. Reaching the takeoff area with approximately an hour to spare, he flipped shallow targets with a black/blue flake YUM Spine Craw. On Sunday, that strategy allowed him to make two small culls that contributed to his winning margin.

Yamaha/Skeeter Pro Taku Ito of Chiba, Japan, finished third with 40-12. Turning in a solid performance that accelerated in the second half, Ito caught limits of 9 pounds, 2 ounces, 8 pounds, 5 ounces, 12 pounds, 4 ounces and 11 pounds, 1 ounce. As he explained, the tough fishing of his Japanese home waters prepared him to capitalize on the late-day downturns, during which he excelled.

In addition to the $100,000 grand prize, Christie also took home $3,000 for being the highest-placing entrant in the Toyota Bonus Bucks program and earned $4,000 through Yamaha’s Power Pay program. Ito claimed an additional $1,500 for being the second-highest placing Yamaha Power Pay entrant.

The next Bassmaster Elite Series tournament will take place on Lake Fork in Quitman, Texas, April 22 through 25, 2021.