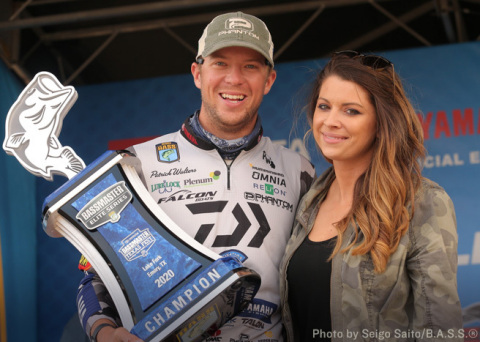 Yamaha Pro Patrick Walters weighed in 22 pounds, 10 ounces on the final day of Toyota® Bassmaster® Texas Fest on Lake Fork to capture a dominant win with a four-day total of 104 pounds, 12 ounces. The victory marks the first B.A.S.S.® Elite win for the angler from Summerville, S.C.

Walters placed second on Day One with 25 pounds, 14 ounces and took over the Day Two lead by adding 26 pounds, 14 ounces. On Semifinal Saturday, his limit of 29 pounds, six ounces — the event’s biggest catch — sent him into Championship Sunday with a 25-pound lead.

The final day’s limit of 22 pounds 10 ounces allowed Walters to surge across the finish line and secure his spot in the Century Club, which recognizes an angler for catching 100 pounds of fish in a four-day event. Walters won with an all-time Bassmaster Elite record margin of 29 pounds, 10 ounces.

“What a week; it doesn’t seem real,” Walters said. “Everyone wants to catch 100 pounds, and it feels good.”

Walters attributes his closing success to a gutsy relocation. All week, he targeted suspended bass amid main-lake standing timber in 10 to 20 feet. When he realized his spots weren’t firing, he moved to a small pocket and caught his final three fish around stumps in less than five feet of water.

Walters said he was very particular about the standing timber he targeted. Recognizing when and where fish were positioning to feed was the cornerstone of his pattern. Realizing that the plan was starting to fizzle proved stressful, but Walters said he focused on maintaining faith in Lake Fork’s potential.

“All year long, it’s been about staying calm and know that it can happen in five casts. Don’t spin out. Stay calm, keep your head in the game and fish eight hours.”

During the tournament, Yamaha Pro Clark Wendlandt won the 2020 Bassmaster®Elite Series Angler of the Year title with 680 points. Wendlandt caught 38 pounds, five ounces to finish in 28th place, earning the points he needed to surpass pro David Mullins by a final margin of 680 to 677 points, and claim his first Angler of the Year title. For the veteran pro from Leander, Texas, hoisting the AOY trophy was the culmination of a phenomenal season that saw Wendlandt record three Top 10 Elite finishes during the 2020 season.

“I put so much pressure on myself because to me, AOY is an impressive accomplishment,” said Wendlandt. “Every fish counts, every fish matters and all of these guys are giving it everything they have every day. It’s a dream come true for me.”