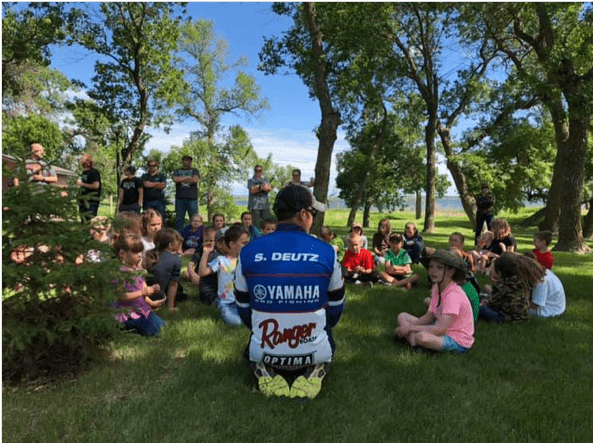 This year marked the third time Yamaha Pro Angler Spencer Deutz and his wife Carley held a free youth and family fishing clinic following the final weigh-in of the Devils Lake Chamber of Commerce fishing tournament. Devils Lake has been notorious for bringing the largest attendance to Spencer’s youth clinics throughout the years and this time was no different. 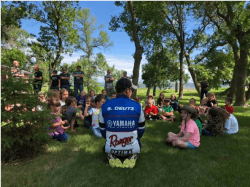 This is the sixth clinic of the year for the duo and it also ended up being special to them in another way. Spencer and Carley were crowned champions of the tournament weighing-in 10 walleyes for 50.33 pounds. This is the second time they have reached the top of the field as they had taken home first place in 2016 when the AIM Weekend Walleye Series came to Devils Lake.

Following the weigh-in, all 41 kids in attendance gathered in the grass to the south of the stage. The future anglers learned how to stop the spread of Aquatic Nuisance Species by the message “Clean, Drain and Dry.” This was the focus of the clinic as adult zebra mussels were recently found in Lake Ashtabula which is just 100 miles to the south of Devils Lake. The kids also learned on the water safety, fish identification and much more. Spencer also introduced Project Future Angler to everyone in attendance.

Project Future Angler is sponsored by Yamaha Outboards and with this, one young aspiring fisherman or woman will win a trip to the 2020 NPAA Annual Conference held January 3rd-4th in Wisconsin Dells, WI. The winner will have the opportunity to meet the best professional walleye anglers in the country as well as receive their own customized professional fishing jersey. Also included will be a NPAA Future Angler membership, conference fees, two nights lodging and a $100 gas stipend. To enter the giveaway, the future angler must write an essay on what they learned during the clinic and how they can help stop the spread of ANS. Essays will be sent to Spencer and the winner will be chosen early November.

Following the clinic, each participant was given a rod/reel combination and a future angler t-shirt courtesy of the National Professional Anglers Associations (NPAA) Future Angler Foundation (FAF). To end the clinic, all the future anglers had their picture taken in front of Spencer’s 2019 Ranger 620FS powered by a 2019 Yamaha VF250XA.

Deutz, the NPAA and the FAF would like to thank the Devils Lake Chamber of Commerce and Grahams Island State Park for granting the use of their facilities to host this event. Deutz’s goal is to educate over 600 kids in 2019. Since 2010, Deutz has hosted over 70 clinics and believes he can make a significant impact on the sport through education and outreach.