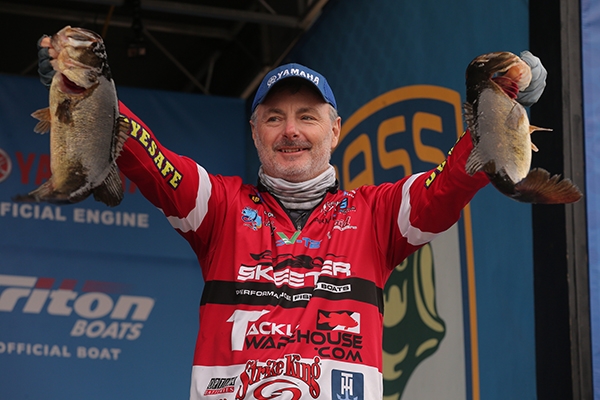 For Drew Cook, Scott Canterbury and Patrick Walters, walking across the stage as a competitor for the first time in this year’s Bassmaster Classic®  will be the realization of a life-long dream. Even for Matt Herren, Keith Combs, Bill Lowen and Mark Menendez, who have fished in previous Classics, the excitement is every bit as strong because this will be the 50th anniversary of the most famous bass tournament in the world.

These anglers are among 13 Yamaha Pros who have qualified for this year’s Classic,® which will be held March 6–8 on Alabama’s Lake Guntersville, an impoundment as legendary as the event itself. Annually rated as one of America’s best bass lakes, the 69,000 acre Tennessee River reservoir has been the site of several Bassmaster Classics and numerous national tournaments during the past half-century.

“It’s a bass factory and has everything the fish need to survive,” said Walters, who fished the lake several times while a member of the University of South Carolina bass fishing team. “Now, fishing a lake I love in the Classic is a dream come true. With good weather, I believe it will be a real shoot-out.”

“I feel like it will take between 63 and 77 pounds to win,” added Herren, a Trussville, Ala. pro who will be competing in his 8th Classic, but his first one at Guntersville. “There are always a lot of variables, but in March, bass will normally be starting to move shallow to spawn. The lake always gets a lot of fishing pressure, but certainly, a one-day catch of more than 30 pounds is not out of the question. The hard part will be backing it up with two more 20-pound days.”

Canterbury, another Alabama resident and the reigning B.A.S.S.® Angler of the Year, attended several Classics as a teenager. In his years as a professional bass angler, he’s experienced some of the kinds of days his friend Herren is talking about, but this will be his first Classic® appearance.

“I think whomever wins this Classic will need to find several different schools of fish in different areas of the lake,” he added, “because on Guntersville, especially with such heavy pressure, location can be more important than an actual pattern. Running and gunning, hitting a lot of different places, might be really important. Somebody will bring in a 30-pound catch, but it’s still going to take two more 20-pound days to win.”

“It is definitely going to be a very special and exciting event,” emphasized Combs, a Texas-based pro who finished 22nd in the 2014 Classic on Guntersville and has two 5th place finishes in other national events on the lake. He likes Guntersville because it has many similarities to two equally famous impoundments near his home, Sam Rayburn and Toledo Bend.

“The fish are already lure-educated because of the heavy tournament pressure, but it’s still going to take a lot of weight to win,” the veteran Yamaha Pro continued. “I like to use crankbaits, but because Guntersville has such varied habitat—vegetation, stumps, rocks, shoreline brush and boat docks—it’s going to take more than one lure and more than one place to catch the 75 or so pounds I think it will take to win.”

Lowen, who has fished two previous Classics at Guntersville, thinks the lake is setting up to potentially produce one of the heaviest winning weights in Classic history.

“Just keep your fingers crossed for good weather,” he smiled. “If it’s a true pre-spawn bite and the big bass are moving shallow as they should be, an angler could catch 20 pounds a day and not even finish in the top 10. The lake is that good. I’ll be fishing jigs, of course, and I already have them packed and ready to go.”

This will be the 6th Classic for Menendez, but perhaps more impressively, the fourth decade in which he’s qualified for a Classic.® He spent three days on the lake in November, but only actually fished for an hour and a half.

“What I did was just look at places where I’d caught some quality bass in previous tournaments and try to learn why they were in those places,” he explained. “It gives me something to build on when the Classic officially begins and at least I have a place to start that first morning. I feel like we’ll have a lot of spectator boats on the water, especially since this is the 50th Bassmaster Classic. Catching a minimum of 20 pounds a day is going to be a challenge, but I couldn’t be more excited.”

A Yamaha Pro last won the Classic in 2018, when Jordan Lee finished the tournament with a winning catch of 47 pounds, one ounce. A total of 13 Yamaha Pros qualified for this year’s Bassmaster Classic, and in addition to the above-mentioned anglers, they include Chris Zaldain, Darold Gleason, Whitney Stephens, Skylar Hamilton, Caleb Sumrall and Ron Hanselman, Jr.