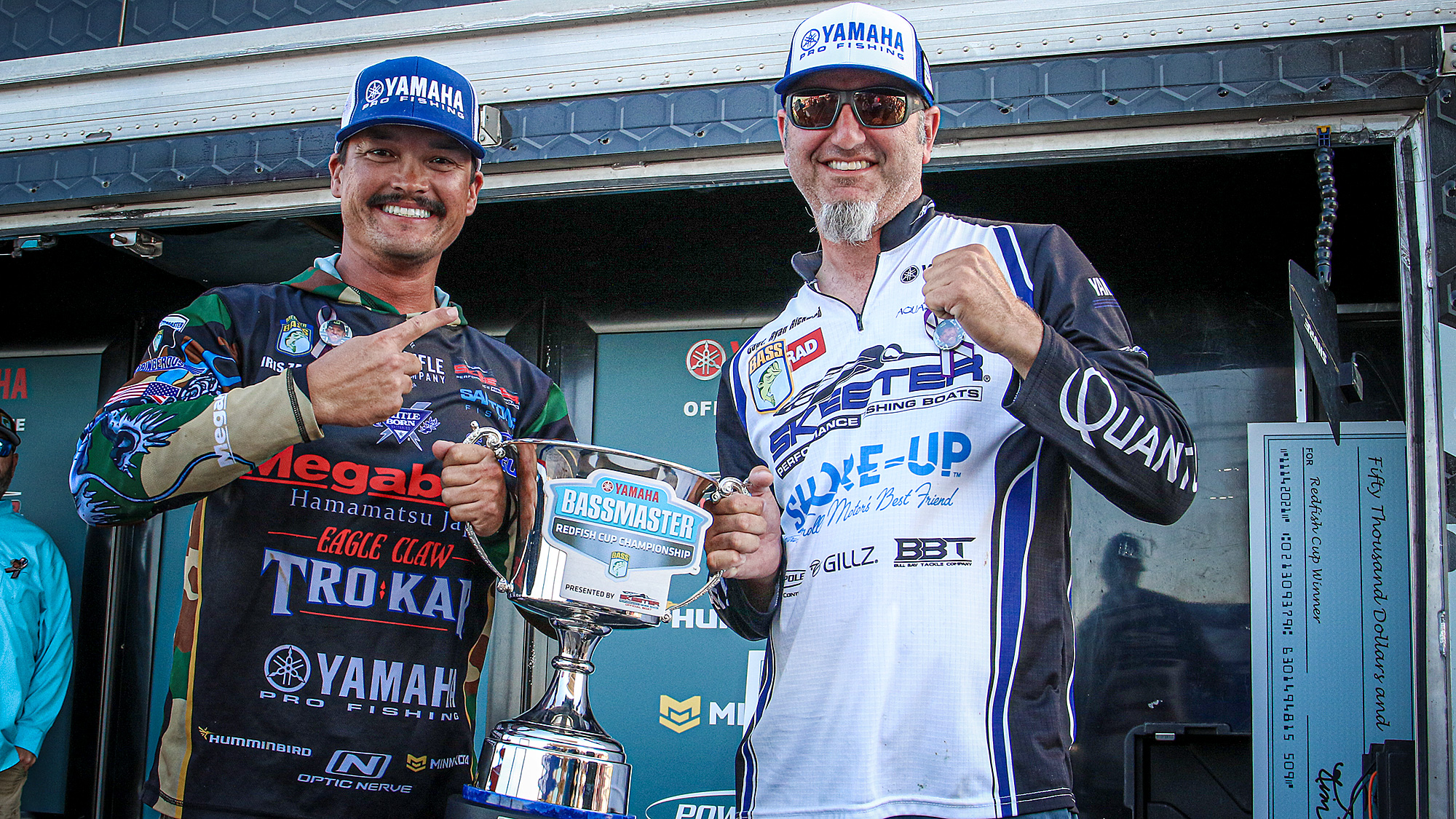 Located on Mustang Island, Port Aransas served as the host city for the tournament and is famous for its abundant inshore fishing grounds that are home to flounder and speckled trout as well as redfish, a powerful predator fish that will violently strike reaction lures like spinnerbaits, buzzbaits and topwater plugs. Redfish hang around common bass-fishing structure like riprap, pencil reeds and aquatic vegetation, where they prey on everything from baitfish to crabs and shrimp. The fish are so similar that anglers sometimes catch both from the same stretch of shoreline.

The 2021 Bassmaster Redfish Cup Championship aired live on Bassmaster.com all three days and FS1 on the mornings of Day 2 and Day 3.

Zaldain and Rickard finished third on Day 1 with 14 pounds, 10 ounces and held on to that spot at the end of Day 2, which brought a front of strong north wind and high pressure making conditions difficult for the entire field. Championship Sunday served up nearly perfect conditions — light south wind, warm and calm — and the anglers put on a bona fide shallow-water redfish clinic that yielded their best bag of the event, 17 pounds, 5 ounces.

Zaldain and Rickard’s final-round catch was the day’s second largest, behind the second-place team of Yamaha Pro Derek Hudnall of Baton Rouge, La., and IFA Redfish Tour veteran Ron Hueston of Naples, Fla., who caught the event’s heaviest limit of 18 pounds, 3 ounces. Edging Hudnall and Hueston by a margin of 2 pounds, 12 ounces, Zaldain and Rickard took home the $50,000 grand prize.

“We figured out a pattern really late on our last day of pre-fishing,” Rickard said. “We had to stick with it for three days. I can’t even express the emotion that I feel — it doesn’t seem real. But on the boat, Chris said ‘Whenever it happens, something special happens.’ Well, I’ll tell you, today was something special on the bite. I’ve never had a final day like today was.”

“I think we caught like 40 fish today — unreal,” Zaldain said. “The signs weren’t right yesterday and we only caught two fish. There were mullet jumping and baitfish everywhere. Things started happening and we went through one fish after another. I think we released 10, 7-pounders and four 8s.”

Zaldain and Rickard caught all their fish on a shallow Laguna Madre flat on the east side of Padre Island, south of the Highway 358 Bridge. As Zaldain explained, they targeted three main areas with sand depressions dropping to about 2.5 feet.

“The redfish were feeding on the shallow flats and then they’d drop into these sandy holes,” Zaldain said. “We would drift up to each of these areas and make bomb casts until we hooked a fish, then we would Power-Pole down and fan cast the area.”

Hudnall and Hueston struggled on Day 1 and placed eighth with 8-6. Rebounding on Day 2, they added 13 pounds, 15 ounces and rose to sixth before racing into a second-place finish with a dominant final-round performance that tallied 40 pounds, 8 ounces and earned them a pair of 36-volt Lithium Pro Powerpack batteries valued at $4,200.